With an eventful Thursday behind them, the Red Sox and David Ortiz head to Baltimore to take on the last-place Orioles.

On the day that a report was released that Ortiz failed a drug test in 2003, his three-run blast on Thursday powered the Sox to a come-from-behind victory over the A's.

Skinny
With the win on Thursday, the Red Sox evened their July record at 12-12. Though they've lost six of their last 10, they've won four of their last seven and are happy to see Baltimore. Against the O's this season, the Sox are 8-2, outscoring them 62-39. The Red Sox only have a better winning percentage over the Tigers and Yankees, against whom the Sox have combined to go 11-0.

Will this be the night that Smoltz finally gets it together, or will it be yet another struggle for the 42-year-old? Last time out, he was rocked by the Orioles at Fenway Park, giving up six runs, all earned, in five innings. Nick Markakis, Nolan Reimold and Ty Wiggington had back-to-back-to-back RBI hits in the third inning before Markakis launched a missile into the right-field bleachers in the fifth.

Guthrie's last showing against the Red Sox wasn't quite as bad, but it wasn't as good. Opposed by Jon Lester at Fenway, Guthrie five runs on 6 2/3 innings, including a three-run homer by Ortiz in the bottom of the first.

Sox starters have pitched seven complete games, second in the AL only to Kansas City's eight.

Ellsbury's 46 steals put him second in the majors, behind Carl Crawford (48).

Dustin Pedroia's power numbers are down, but the reigning AL MVP has scored 72 runs, fourth-most in the AL.

Lester struck out just two batters on Thursday, his lowest total of the year. Still, the lefty ranks third in the AL with 148.

Brad Penny's 5.07 ERA is fifth-worst in the AL among qualified pitchers.
Orioles
The Orioles have a winning record at home (28-23) but are 16-34 on the road.

Unlike the Red Sox, the Orioles have found themselves on the wrong end of five-run games more often than not with an 11-16 record.

Brian Roberts has scored 75 runs, second-most in the AL behind Chone Figgins (79).

The Orioles have no players in the top 30 in the majors for batting average or home runs.

Adam Jones leads the team with a .298 average.

Markakis leads the team in RBIs with 69. Jones has 59.

Brad Bergesen, at 23 years old, leads Orioles starters with a 3.56 ERA. He is not scheduled to pitch this weekend. He was hit in the shin by a line drive on Thursday, though the extent of that injury is unknown.

Black and Blue
Red Sox
Right-hander Daisuke Matsuzaka
was placed on the disabled list retroactive to June 20 with mild
right shoulder strain. Lost in the shuffle of Thursday's steroid news was Dice-K's statement that he did not go public with any complaints.

Right-hander Tim Wakefield was placed on the 15-day DL retroactive to July 18 with a lower back strain.

First baseman/outfielder Jeff Bailey was placed on the 15-day DL retroactive to July 5 with a left ankle sprain.

Rich Hill was placed on the 15-day DL on Wednesday with a shoulder injury.

Chris Ray, recovering from a biceps injury, pitched a scoreless inning in Triple-A on July 26.

Dennis Sarfate was placed on the DL on May 4 with a finger injury.

Koji Euhara was placed on the DL on June 29 with an elbow tear.

This Date in Red Sox History
In 1961, heavy rain halts the All-Star Game at Fenway Park, ending the game in a 1-1 tie.

Overheard
"I've always been a true guy with you guys, and honestly, right now, I don't have any information about it. I'm going to get more info about the situation, and I'm going to honestly tell you guys what's up. But right now, I don't have no answer, no information."?
— David Ortiz on the report that says he tested positive for a banned substance

Michael S. Schmidt, the reporter who broke the story, called in to NESN to talk to Tom Caron.

The Red Sox are reportedly working out a deal for Victor Martinez.

Orioles
Bergesen took a hot shot off the shin on Thursday.

Andy MacPhail says the O's need to go through some "short-term pain."

MLB
The non-waiver trading deadline is upon us.

The Cubs acquired John Grabow and Tom Gorzellany from the Pirates.

Outlook
With the Yankees losing in walk-off fashion Thursday night, the Sox picked up a game in the AL East. A series win against the O's could get them even closer, with the Yankees finishing a four-game set in Chicago over the weekend. 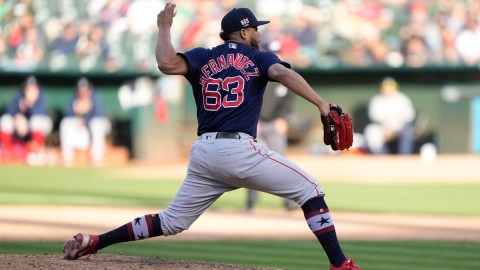