Former Canadiens head coach Guy Carbonneau wants nothing more than to return to the bench, but before he gets that chance, he's going be to high above the ice in the broadcast booth for CBC's Hockey Night in Canada.

"Hockey Night in Canada has always been a good stepping stone for some
of the guys to go back into the NHL – for that reason I think it's a
great thing for me," Carbonneau told The Canadian Press on Wednesday. "That's always been my No. 1 priority — I really didn't want to sit at home all year and do nothing."

The Habs fired the skipper after 66 games last season after the team didn't reach its lofty expectations. The 49-year-old played 13 seasons for the Canadiens — including five as captain — winning a Stanley Cup with red sweaters in 1986.

Hockey Night in Canada executive producer Sherali Najak would like to see the three-year coach bring the fire he's shown from the bench and the ice into the broadcast booth.

"He's going to stay a hockey guy," Najak said in an interview from Toronto. "He'll bring across what he thinks about the play and he's a pretty edgy guy anyway, so I'm sure he'll bring that across in the booth."

Kris Jenkins Getting Loose for Week 2 Battle With New England 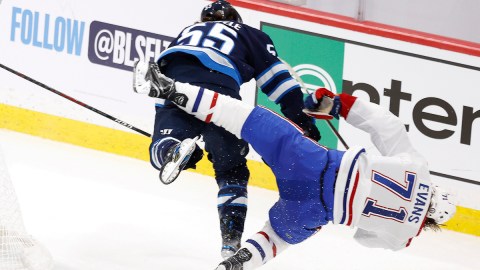