The Red Sox began their final road trip of the season with a 3-1 win in Baltimore. Clay Buchholz improved his record to 6-3 with the win. The Sox have won each of their first five series against the Orioles this season and are 13-2 against them this year.

In his last start — the second game of a doubleheader Sept. 13 against the Rays at Fenway — Jon Lester earned the win, shutting out the Rays while allowing two hits and three walks with seven strikeouts. The outing extended his scoreless streak to a career-high 17 innings.

David Hernandez is making his 17th start of the season. The Orioles are 2-6 in his nine starts at Camden Yards, while Hernandez is 2-4 in those games with 5.40 ERA (25 earned runs in 41 2/3 innings). Hernandez has made three starts against the Sox this season, going 1-2 with a 5.79 ERA (nine earned runs in 14 innings). He has faced the Sox once in Baltimroe this season on Aug. 1, going 4 1/3 innings and allowing two runs on solo homers by Dustin Pedroia and Kevin Youkilis. In total, he surrendered seven hits, four walks and earned four strikeouts. He threw 102 pitches in that outing.

Twenty-two players have hit at least one home run for the Sox this season, one shy of the club record of 23 in 1996.

Jonathan Papelbon has a career ERA of 0.64 (two earned runs in 29 1/3 innings) against the Orioles.

Pedroia extended his hitting streak to 10 games with a third-inning single on Friday.

The O’s have just 14 hits in their last three games.

In his last eight games, Luke Scott is batting .296 (8-for-27) with four doubles, two home runs and seven RBIs.

The O’s have been shut out nine times this season, six times at home.

Rookies Matt Wieters and Nolan Reimold have two of the three walk-off home runs hit by AL rookies this season.

Orioles
Adam Jones is on the 15-day DL with a sprained left ankle.

Rich Hill is on the 60-day DL with left shoulder inflammation.

Brad Bergesen is also on the 60-day DL with a left leg contusion.

In 1953, Mel Parnell shut out the Yankees for the fourth time that season as the Red Sox won 3-0. He was the first pitcher to not allow a run against New York all year since Walter Johnson in 1908.

“We talk about it all the time. Every five days, you send him out there and you feel like you know what you’re going to get. That’s important. I know you have to have good stuff, but that’s part of him growing into this. It’s exciting. It’s really exciting.”
—Terry Francona on Clay Buchholz after Friday’s 3-1 win over Baltimore

Red Sox
The Red Sox took another game from the O’s.

The Sox are shutting down a pitcher.

Tim Wakefield is scheduled to rejoin the rotation Monday.

Orioles
It was another loss to the Sox for the O’s.

The O’s aren’t giving upd on the season.

MLB
The Twins beat the Tigers and pull within three games.

Scott Kazmir shut out the Rangers.

The Rockies are reeling. 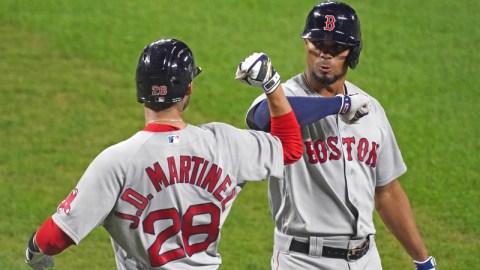