The New England Patriots are gearing up for their preseason finale Thursday night against the New York Giants at Gillette Stadium. Because the starters aren?t expected to receive much — if any — playing time, this will serve as a last chance for the team?s bubble players to showcase their talents in live action before Saturday?s roster cuts.

With that in mind, here is a prediction as to how the Patriots? first 53-man roster will look in 2009.

Note: This is a high number for head coach Bill Belichick, but it?s also the first time in years he has used this many four-man fronts. It?d be hard to imagine Belichick cutting the versatile Wright, and rookies Brace and Pryor have displayed a ton of potential.

Note: This might be Shawn Crable?s last game with the Patriots after an inconsistent year and a half with the team that was marred mostly by injuries. If Crable performs well, or if he has shown significant improvement in practice, Belichick could certainly carry Crable on the roster instead of a sixth wide receiver. With Tedy Bruschi?s retirement, Belichick might want an all-hands-on-deck approach.

Note: The depth of this group is dependent on the health of Springs, who has missed considerable time in the preseason. If he can be a formidable starter across from Bodden, that opens some options with Wilhite, who can play nickel and has also shown the ability to make an impact as a starter. Butler has appeared to take the fourth-string role from Wheatley.

Note: Slater, who has been working with the safeties this year, has been hot and cold during training camp and the preseason. At one point, he had difficulty catching kickoffs during practice, and his egregious fair-catch interference penalty against the Washington Redskins (his second of the preseason) really put him on the roster bubble. But Belichick has an affinity for Slater, who has a team-high three special teams tackles this preseason (the rest of the team has 12 total). I?ve got Slater sticking around with the team over an extra linebacker or offensive lineman, although he better be on his best behavior against the Giants.

Note: Belichick has typically kept eight or nine offensive linemen, but one backup at each position should suffice.

Note: I have to believe Belichick is targeting another veteran quarterback, say, maybe Damon Huard, who was just released by the San Francisco 49ers and was with New England from 2001-03. If Belichick can sneak Hoyer through waivers and onto the practice squad — which could be tricky since Hoyer said other teams had interest in signing him after April?s draft, and his stock has only risen since then — there?s no reason not to bring in a proven veteran backup.

Note: Aiken had a stellar camp. He?s got a big frame (6-foot-2, 215 pounds), and he?s got consistent hands. He can also help out on special teams. Meanwhile, Terrence Nunn, one of the best stories in camp, has practice squad eligibility, while Aiken doesn?t. If Nunn clears waivers, expect him back in Foxborough.

Note: No surprises here. They?re steady at the top, and Green-Ellis has been really strong again in the preseason. It?s doubtful anyone in this group will have a dominant role during the regular season, and the number of hard-nosed rushers in this group will pay dividends in the fourth quarter of a lot of games.

Note: In minicamp and even early in training camp, it was almost universally expected that the Patriots would carry four tight ends into the regular season, but Alex Smith never caught on with the Patriots? system and couldn?t make an impact on the field. He might be able to save himself with a big game Thursday (providing it is used to cap off an excellent week in practice). Plus, Thomas showed some real improvement in camp, and that dropped Smith even further away from the top three on the depth chart.

Note: Gostkowski has been one of the most consistent at his position since 2006.

Note: Hanson has averaged 42.0 yards on 14 preseason punts, and opponents are only averaging 2.5 yards per return against the Patriots? coverage unit.

Note: The rookie won the competition against veteran Nathan Hodel, who was released Monday.

Note: McKenzie is done for the year after suffering a knee injury during rookie camp.

Note: The trio from Navy were called to report for active duty.

Note: LeVoir cannot come off the physically-unable-to-perform list until after Week 6.

Note: While Tate?s injury occurred during North Carolina?s game against Notre Dame during the last college football season, the injury didn?t happen under the Patriots? watch, making him eligible for this list, which has similar rules to the PUP list.

Penny Proves National League Is No Match for American League 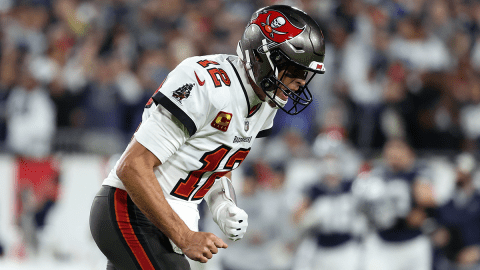