Jacoby Ellsbury has a new number and a new position. But will his spot as leadoff hitter change? Probably not.

Ellsbury fits the bill for being at the top of the Red Sox' order in 2010. The lefty averaged .301 with a .355 OBP last season and led the team with 70 stolen bases. He produced as a leadoff hitter in the second half of the season after being replaced early in 2009.

His speed will continue to be his weapon, and expect his plate discipline to improve with maturity. The swing-happy hitter had 49 walks in 2009, ranking him 55th in the American League. Posting more walks as the leadoff hitter, especially with Ellsbury's hustle, would be a plus for Boston?s offense.

Ellsbury is a good option to set the table for the heart of the lineup. If he stays confident and consistent, he is the front-runner to hold down the No. 1 hole in the lineup, but other players have the credentials to take over should he falter.

J.D. Drew is another possibility for the No. 1 spot, though it's a slim chance. Drew can be streakier than Ellsbury and Pedroia and most likely will fill a hole later in the order. He had a .279 average, .914 OPS and .392 OBP. He has speed but only swiped two bases in 2009.

Marco Scutaro could be a leadoff option, too. He is a step up from Alex Gonzalez on offense and is coming off a career year in which he batted .282 with a .379 OBP and .789 OPS. Scutaro adjusted his batting stance to improve his hitting and become a steady contributor. Scutaro also stole 14 bases last season as the starting shortstop in the Blue Jays' lineup. If he maintains that offensive output, Terry Francona could write Scutaro's name at the top of the lineup card.

But Ellsbury is the name Francona will be writing most of the time. Although the Red Sox have many consistent batters to start off a strong offense, last season's leadoff hitter is the best option for this season and gives the Red Sox the best chance to be successful. In Ellsbury, they get a consistent hitter with speed. As long as the 26-year-old continues his upward trajectory, Ellsbury has the potential to be one of the best leadoff hitters in baseball.

That bodes well for the Red Sox this season — and beyond.

Monday, Feb. 22: Could this be Jonathan Papelbon's last year with the Red Sox? 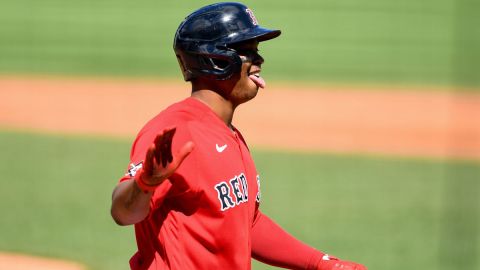