Grinders Starting to Produce as Bruins Beat Up Thrashers 4-0 - NESN.com Skip to content The Bruins have won consecutive games for the first time in two and a half weeks, but Tuesday's 4-0 win over Atlanta and Sunday's 2-1 win over the Rangers obviously hold much greater value.

Why? Because the Bruins just beat two teams challenging them for the final spot in the Eastern Conference playoff race. They also proved at the perfect time that they could follow up one 60-minute effort with another and do so in a high-pressure game.

Following the win over the Thrashers, the Bruins now trail both the Flyers and Canadiens by just one point and actually have a shot to finish as high as fifth in the conference if they can catch the Senators, who stand five points ahead of them. But regardless of where they finish, this Bruins team — the same team that looked all but finished after their flat performance last Thursday in a 3-0 loss to the Penguins — is suddenly playing with emotion, conviction and purpose. The B's are playing gritty and smart hockey, and some of their key players who have struggled of late seem to be finding their games.

Obviously, Tuukka Rask was brilliant again Tuesday night with a 28-save performance that included stopping a second-period penalty shot. The win improved his record to 18-10-4 and was his fourth shutout of the year, but he has been consistently solid all season long.

The problem for Boston this season, though, has been that several players who were such major contributors last spring have disappointed this time around.

Tuesday night, two of those players, David Krejci and Milan Lucic, played significant roles in the win, each chipping in with a goal and an assist. Krejci now has 11 points in 12 games since the Olympic break. He is also going to the dirty areas again, as witnessed by his goal tonight, when he took a feed from Michael Ryder on the doorstep to beat Thrashers netminder Johan Hedberg 9:25 into the first period.

Lucic meanwhile, is banging bodies again and creating chances for himself and his teammates. His goal was his second in his last six games and yet another that he's scored from in between (and just above) the faceoff circles after breaking free from an opposing defender. Lucic has three points in two games and is using his strength to get in scoring position again.

Another player who has struggled to produce this season has been Steve Begin. But over the last two games, Begin has been precisely the pest that drove the Bruins and their fans nuts when he was playing for the Canadiens the last five seasons. On Sunday, he dropped the gloves with Rangers forward Brandon Prust, and Tuesday night, he was a thorn in the Thrashers' sides and also scored his first goal in 28 games. The Bruins need more of this from Begin and Daniel Paille for their fourth line to truly be effective. Shawn Thornton is a factor almost every night, but he can't do it alone.

The only negatives from Tuesday's big 4-0 win would be the injury to Vladimir Sobotka — who left the game with a head injury and didn't return after he was hit by Thrashers forward Evgeny Artyukhin in the first period — the Boston power play that again laid a goose egg and Ryder, who missed multiple scoring chances and can't seem to find the twine. Yes, he had an assist, but the Bruins need more from Ryder, or they will continue to struggle to score. 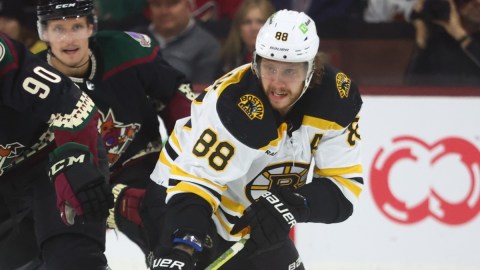