In 2008, the Boston Celtics claimed the NBA title with the same starting five they trot out on a nightly basis this season. The veteran "Big Three" of that team is now two years older and a step slower, but the team is no longer run by just the Big Three.

After finishing fifth in the defensive player of the year voting, Rajon Rondo garnered four votes for the NBA's Most Improved Player Award, including two first-place nods.

The recognition is a reflection of how far the 24-year-old point guard has come over the past three years.

Whereas his role on the championship team revolved around bringing the ball over across half-court, playing good defense and avoiding jumpshots like they were the plague, Rondo now has the keys to the C's attack. The Kentucky grad's ability to get to the rack at will coupled with outstanding court vision has made him the catalyst of the offense.

A triple-double threat every time he is on the floor, Rondo nearly doubled his assist numbers from '08, dishing out 9.8 dimes per game as opposed to just 5.1 two years ago. His passing ability has allowed Paul Pierce — not to mention Ray Allen — rest his body on the outside more often by drawing defenders and kicking out for open 3s. It's not a coincidence that Pierce has his highest career 3-point percentage this season (.414), good for 12th in the NBA.

Rondo has harnessed the talent that was on display the past few season (albeit erratically) to becomes a dynamic point guard. Now, with an All-Star appearance under his belt, Rondo is quite possibly the heart and soul of the Celtics.

Drew Brees Will Appear on Cover of Madden ’11 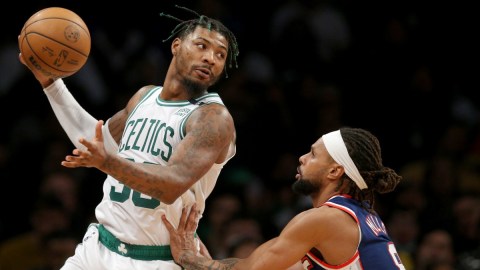