FOXBORO, Mass. — There was only so much that Tyrone McKenzie could take. The middle linebacker ripped up his right knee during the second day of the Patriots' 2009 rookie camp, worked hard in rehabilitation, attended every film session during the season and burned his eyes into the playbook.

Game days, though, were too tough to for McKenzie to handle. Early on, he showed up to Gillette Stadium like thousands of others, but it was overly taxing on him. Even though McKenzie knew in April 2009 that his rookie season would be washed out, the idea of working with his teammates for six days and then becoming a glorified fan on the seventh day was unsettling.

Eventually, McKenzie traded in his ticket to the team suite for a less luxurious cushion on his own couch. The panoramic view of the 100-yard field turned into a few feet of high-definition television. Clearly, the mental recovery can be just as grueling as the physical side of it.

"It was tough," McKenzie said. "After a while, it got really tough to sit around and watch the games, so I watched them at home. Then later on that week on Monday, I'd watch the game tape in the linebacker room. It was very tough to come here and watch games, just watching guys that you basically do everything with except for practice. When they practice, you go do your rehab and do your training. It was tough because you just wanted to get on the field with them."

Thirteen months after tearing ligaments in his knee, McKenzie said he's fully healthy and has no restrictions. He underwent a clean surgery, never faced a setback and won't wear a brace on the knee. Perhaps the only signs of the injury will be the blank stat column on his Topps football cards.

"It's going real well," McKenzie said on Tuesday. "I worked hard. As soon as it happened, it hits you for a couple of days that the season is basically over for you. You just work hard and just come back as strong as you can. I feel great right now.

The Patriots wanted McKenzie to stay local during his surgery and then the immediate aftermath for his recovery, but it was his choice to remain in Foxboro year-round. He participated in film sessions as though he were an active player, and he maximized his short time working with former Patriots linebackers Tedy Bruschi and Junior Seau. Bruschi, in his time with the team in training camp, taught McKenzie how to simplify things, and Seau instilled the virtues of moving through mistakes and bouncing back for the next play.

Because McKenzie was so diligent during his rehabilitation, he refuses to look at 2010 as rookie year part deux; he put in enough work to think of himself as a veteran.

"Going away [to home in Florida], I'm not going to learn anything," McKenzie said. "I could have taken my playbook and tried to learn as much as I can, but there's no coach around to ask questions because the coaches are busy throughout the season. So every chance you have them in the linebacker meeting room, that’s your opportunity to ask a question real quick, so it was best for me to stay up here."

McKenzie, who will fight with Gary Guyton and Brandon Spikes for a starting spot next to Jerod Mayo, said he weighs 248 pounds and has added eight pounds since getting drafted out of South Florida. The extra muscle will give him more speed and strength, and the collegiate tackling machine boasts that he's got the game to either run through or around an offensive lineman.

And those skills won't go unused, not for a player who has displayed such an extraordinary amount of drive and determination over the last few years. McKenzie dropped out of Michigan State after his freshman year in 2004 to move home to Riverview, Fla., and work the overnight shift at a local Hampton Inn to support his three sisters and help his mother pay the bills after she was in a car accident and lost her daycare business. McKenzie later enrolled at Iowa State but transferred to South Florida after the 2006 season because his mother was going through a divorce with his stepfather (the linebacker's birth father died when McKenzie was 9).

He's been through a lot, more than most 24-year-olds have ever known. In the grand scheme of things, this knee injury wasn’t the end of the world. McKenzie worked through it and can't wait to get on the field when New England's organized team activities begin next week.

And McKenzie has no fear or hesitation. At this point, the kid's just looking forward.

"You just have to keep bouncing back," said McKenzie, whom Bill Belichick called one of the most mature people he's ever scouted in the draft process. "That’s what I've done my entire life.

"I'm far from worried about it. Right now, I'm just ready to go out there and compete. It is what it is. You can't be afraid of life." 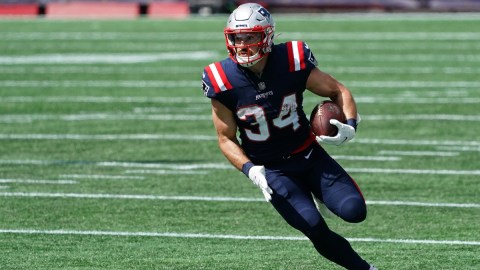