Mike Cameron goes under the knife Friday for season-ending surgery to correct an abdominal strain. While the finality of the procedure is a bit harrowing, especially for a guy who was so excited to make a splash in Boston, it will offer a bit of relief.

The 37-year-old outfielder was in varying degrees of pain since spring training. He had designs on fighting through the issue, but it took less than two weeks before it began to affect him on the field.

In a 6-5 loss to Tampa Bay on April 17, Cameron dropped a fly ball hit right at him, one of a handful of misplays early in the season that made him look nothing like the Gold Glove-caliber center fielder the Sox had hoped for. The day he committed the costly error against the Rays his average sat at .222. He looked awkward in the field and slow at the plate.

Two days later, Cameron was on the DL for the first time and missed over a month of playing time. Even when Cameron returned in late May it was a matter of getting rest when he could and fighting through the pain at all times.

The starts were sporadic and the production about the same. Cameron had just one home run and eight RBIs through the end of June and a hot stretch in July (he hit 13-for-36 with three home runs in a 10-game span) was quickly followed up by another slump and more severe pain.

"I'm sure he was very uncomfortable," manager Terry Francona said. "We appreciate him trying.

"He was at a point in his career where it meant a lot to him. He really wanted to be a part of what we were doing. At the same time it felt like we got to a certain point, rather than try to muddle through September, he was in agreement with us that this would be the wrong thing to do, to continue to try to do this."

Cameron finishes at .259 with four home runs and 15 RBIs in 48 games. He is signed for another year at $7.25 million. With the emergence of Ryan Kalish and the supposed return to health by Jacoby Ellsbury by the beginning of spring training, Cameron's role in 2011 is, for now, a bit up in the air.

Knowing he gave his all in 2010, at least he can look forward to whatever that role is with a clear conscience.

"I have no regrets," Cameron said. 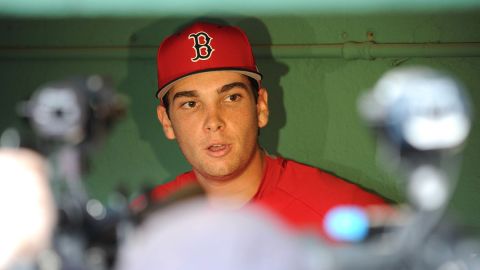