It will be his last one for a while, as the young Russian defenseman and forward Max Sauve were each assigned to Providence after the game.

While disappointing for the pair, they'll bring some positives down to the minors with them from their camp experiences.

"I thought he was patient, he moved the puck," said Claude Julien of Alexandrov. "Again, this is a young guy that doesn't understand the language totally, so his learning curve is a little longer than others, but his hockey sense is there. ? Tonight I thought he handled himself extremely well. It was his first game and he looked poised and once in a while he took hits to make plays, but he is a guy that comes to play and is fearless."

Alexandrov played 17:50 in his exhibition debut and finished a plus-1 with a blocked shot. He made several good defensive plays early, breaking up scoring chances. But he also had a giveaway, no shots and was the only Bruin without a hit in the game. At 6-foot-1, 185 pounds, he will have to add bulk and strength to adapt to the North American game, but he'll get the chance to do that in the American Hockey League and still has a promising future ahead of him.

Sauve showed flashes as well, and will also have a chance to hone his skills further in Providence. He was scoreless in two games this preseason, finishing a minus-1 in 11:04 on Saturday.

With those cuts, the Bruins now have 33 players remaining in camp, including injured forwards Marc Savard, Marco Sturm and Trent Whitfield. 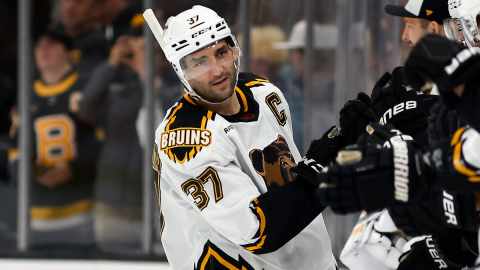