WILMINGTON, Mass. — When the Bruins open the season in Prague, it will mark the franchise's first excursion to Europe in over 50 years, as the B's last crossed the pond for a barnstorming tour of exhibition games with the Rangers after the 1958-59 season.

But a couple of current Bruins have had a much more recent European adventure, as forward Nathan Horton and defenseman Dennis Seidenberg were both with Florida last season when the Panthers opened the 2009-10 campaign with a pair of games against Chicago in Helsinki, Finland. Horton and Seidenberg both shared some thought about the benefits and risks of beginning a season on another continent after Wednesday's captain's practice at Ristuccia Arena.

"It was kind of annoying because we traveled so much in the preseason," said Seidenberg. "We traveled to Edmonton, Calgary, up to Halifax, that was all before even getting to Europe. Then flying to Finland for eight to nine hours, maybe 10 hours, plus the time change — that was all a lot to handle. It was a very good experience nonetheless."

The Bruins will make a stop for an exhibition game in Belfast, Northern Ireland, before arriving in the Czech Republic, but their itinerary shouldn't be nearly as daunting as what the Panthers faced last fall.

"We actually traveled all over the place before we went to Finland, so it was a long month," said Horton. "I know we're not traveling too much here before [going to Prague], so I don't think it will be too bad."

Horton actually sees the trip as a good opportunity for the team to bond on the road, which could be particularly beneficial to the new additions to the club.

"It's always nice, especially for me being new to the team, to get a chance to go away with the guys for a while to start the year," said Horton, who came over from Florida along with Greg Campbell in a June trade. "Hopefully it will be a good time and we start the year off right."

Florida showed its weariness from last year's trip as the Panthers went just 4-7-1 in October last season after traveling to Helsinki. But Chicago had no trouble shaking off the jet lag, going 8-4-1 in the opening month and eventually winning the Stanley Cup. Pittsburgh also won the Cup in 2009 after opening that season in Stockholm, Sweden. That's the precedent Horton hopes to follow this year.

"You look at those teams, so you obviously can't make too many excuses about [the travel]," said Horton. "I think it will be a good experience and a chance to get to know the guys, and hopefully we can be another one of those teams that can come back and win the Cup."

First, they'll have to come back and play too more road games in New Jersey and Washington before the home opener at the Garden, but Seidenberg believes the bigger challenge for the Bruins will be getting their body clocks adjusted in time to play the games in Europe, rather than being worn out upon their return.

"I think it's more going there that it's tougher getting used to with the time change," said Seidenberg. "Coming back is not a big deal, but going there you're really tired and it really hits you that first day when you just want to fall over and go to sleep."

Seidenberg will have some extra motivation to get up for the games in Prague, as his family will be on hand to see those contests. It's not exactly a quick trip, as it's about an eight-hour drive from his home in Germany to Prague. That's still an easier trip than flying to the U.S., though Seidenberg did add that his family does plan to come to Boston this year as well.

Wherever they watch him, there's a good chance the Seidenberg clan will get to see him playing alongside Bruins captain Zdeno Chara on the Boston blue line. The two defensemen clicked immediately when put together as a pairing late last year, though coach Claude Julien could opt to split them up this season to better balance the pairings.

"It's definitely nice to play with him," said Seidenberg of Chara. "But no matter who I play with, it's not going to change the way I play and I'm not going to be unhappy. It's just whatever the coach thinks works best for matching against other teams, I'll just go with it. It is definitely nice playing with him though."

Seidenberg didn't get a chance to skate with Chara on Wednesday, as the captain didn't participate in the second day of captain's practices. Chara did skate before the workout with several of the team's goalies but wasn't present for the main drills, which included a 4-on-4 scrimmage and breakaways on goalies Tuukka Rask and Nolan Schaefer.

Even without Chara beside him, Seidenberg wasn't complaining. This time last year he was still unsigned, skating with some Hurricanes players in North Carolina, and didn't end up getting a deal from Florida until two days after training camp started.

"That was not a fun time," said Seidenberg, who avoided a similar situation by re-signing with Boston in June.

Seidenberg was also happy to be back on the ice after missing the playoffs with a sliced tendon in his forearm from an errant skate in a game on April 3 in Toronto. Seidenberg will wear a protective sleeve this season to prevent a repeat of that fluke injury, but otherwise he has no lasting effects from the mishap.

"I feel healthy and ready to go," said Seidenberg. "It's just like before. If there's a positive to take out of it, I think you can call it a good injury because it just went back to what it was before."

How To Watch Red Sox, Bruins Full Coverage On Sunday On NESN Networks 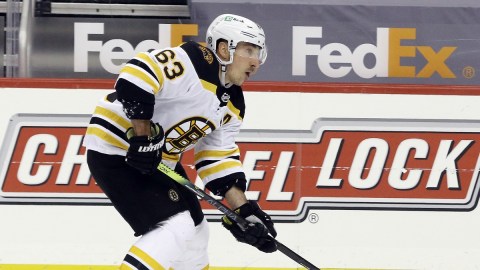