Baseball's offseason wheeling and dealing is about a week from truly taking off, but the picture on one front has become a bit clearer as the annual Elias rankings of free agents came out Thursday.

The list is compiled each year for Major League Baseball in order to determine the categories of free agents. Type A free agents who are signed by another team can net their original team a first-round pick and a supplemental round pick, while Type B players in the same situation reel in a supplemental pick only.

For the Red Sox, six such players are on the list. Unsurprisingly, third baseman Adrian Beltre and catcher Victor Martinez are both Type A free agents. David Ortiz, Jason Varitek, Mike Lowell (until his retirement is formalized) and Felipe Lopez have Type B status.

To rehash how the process works, let's use Beltre as an example. After the All-Star files for free agency following the World Series, the Sox have until Nov. 23 to offer him arbitration, meaning the two sides can negotiate a one-year deal based on what he did in 2010.

If Beltre decides to seek big bucks and a long-term deal (he will, folks), he can turn down the offer by Nov. 30. Once he signs with another team, the Red Sox will receive either the signing club's first-round pick (if they are in the bottom 15 of the first round) or its second (if they are in the top half) and a pick in the supplemental round, which follows the first. This generous form of compensation is the reason that many teams who value high draft picks tend to stockpile pending free agents.

To clarify even further, consider two teams that had been rumored at one time or another to be interested in Beltre: Anaheim and Detroit (the Tigers have since re-signed third baseman Brandon Inge so they figure to be out of the mix, but just play along).

If Boston offers Beltre arbitration and he signs with the Angels, the Red Sox will receive Anaheim's second-round selection in 2011 since they are picking 14th overall. If the Tigers were to sign him the Sox would get the 19th overall pick from Detroit.

If there is no offer of arbitration and Beltre walks then Boston gets nothing in return. That won't happen.

Type B free agents, if and when they decline arbitration and sign elsewhere, provide their original team a supplemental pick as well, but that is it. The signing club does not give up anything. Ortiz expects to return, Varitek is up in the air and Lowell is obviously done.

Lopez was signed by Boston in September in order to get a supplemental pick if and when he finds another landing spot. That's what makes such a silent signing potentially huge. In 2005 alone the Red Sox drafted Clay Buchholz, Jed Lowrie and Michael Bowden in the supplemental round. Promising right-hander Anthony Ranaudo came in that round back in June. 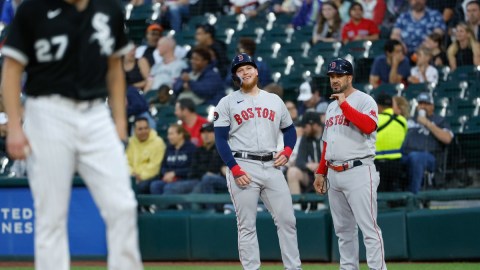