While some Patriots fans feel that it was a terrible decision to trade Randy Moss at this point in the season, former Patriots wide receiver and NESN Daily insider David Givens believes it will benefit the team.

According to Givens, this trade will allow Tom Brady to involve all of his receivers and tight ends without being forced to throw to Moss, leaving Brady a little more comfortable in the pocket.

Below is what Givens had to say about the situation.

On the timing of the trade
I'm not exactly surprised. It's interesting because I think the Pats had a good amount of time to see the outcome of Tate and Wes Welker's knee situation. It gave them some time to see if those guys would be healthy. It’s also a good time for this team (to make this trade) because it’s during a bye week. It's a period of time where you don’t have a lot of distractions going on, where you release a big-name guy and the younger guys can still focus on the task at hand, which is football.

In my opinion, I saw this coming a lot sooner than when it happened. I saw it coming when Randy went off and had his rant. Obviously, agents talk to players, and rumors are all around the league, and I feel that Randy kind of knew about this, probably during Week 1.

On the third-round pick the Patriots got in return
Third-round compensation — I think that's pretty legit. I think that's a pretty equal payout for Randy. Randy is obviously getting old now. Some people would argue that he’s not a complete receiver. A lot of times, teams want a receiver that blocks and catches and does all the other things that receivers do – I know some seventh-round receivers that can be a lot more valuable than the things that Randy does. Troy Brown is one of those guys that was an eighth-round pick. As an eighth-round guy, that was very valuable. The Vikings giving up a third-round pick, I think that's pretty equal.

On which Patriots receivers will benefit most from Moss' departure
When you look at Tate, I think Tate's going to have the biggest impact out of Randy Moss' departure. Look at Matthew Slater also. He’s a guy that hasn’t had a lot of playing time. He’s a very fast guy. I think his role is going to improve as well. You look at Julian Edelman, a guy who is more of a slot receiver. I think his role will improve also. You look at Wes. He may have one or two extra catches, but as a receiver corps as a whole, I think all their catches will be more productive. You can go to the tight end side. Aaron Hernandez and Rob Gronkowski, I think the two of them will have more catches, but specifically, Hernandez will be a guy that I think will go out and play some 'X.' He’ll play in the slot some as well. But the two guys I think who will have the most impact will be Tate and Hernandez.

On how the trade will impact Patriots receiver Brandon Tate
Brandon Tate's one of those guys that I used to watch a few years ago when he was in college in Carolina, and in my opinion, before he got hurt, he was a guy who could have won the Biletnikoff Award — that’s the best receiver in college football. Brandon Tate is a very talented guy. I've watched his routes. I’ve watched his technique, his speed, the way he runs. He's a very talented guy that has obviously attained a lot of skills playing at North Carolina, so if you look at Tate in the preseason and you look at him in the first couple weeks, you can tell that he's maturing week to week. He had one fumble last week, and obviously, he made up from that this week against Miami, but he’s one of those guys who seems like he’s improving week to week. I'm very confident that he will be able to step up and be that number one-or-two guy, whichever is needed. He's more of a complete receiver, so I think he's going to help out the team a lot.

On how losing Randy Moss will affect quarterback Tom Brady
First things first, I think Tom's thinking of the younger receivers that are with the Patriots, and you know, letting these guys know that they need to continue to be productive, and they better step it up, because Randy isn't here anymore to take pressure off the other guys.

When you look at Tom and Randy's relationship together, the two of them did do great things here as Patriots, but to be honest with you, I think this may be kind of a relief, a monkey off of Tom's back at this point. It may sound funny for me to say this, but when you look at what Randy brought to the Patriots offense, being a receiver that doesn’t block at times can hurt the team. Being a guy that Tom is almost forced to have to throw to can almost hurt the team as well.

In my opinion, I feel that a monkey is almost off of Tom's back, and I think I saw that in the Miami game. It seems a little backward to say this, but it seemed that the game plan was not to throw Randy Moss the ball, and I saw the elation on Tom Brady's face every time the special teams would score.

Yes, it was a big win against Miami, on the road, but at the same time, I thought that Tom and Bill almost felt like, "What a relief, we’re winning this game without Randy." So I think this was almost planned maybe a couple of weeks in advance. I really think there's a big monkey off of Tom's back, and I can almost guarantee you that the Patriots will look like the Patriots of 2002-2005 again. 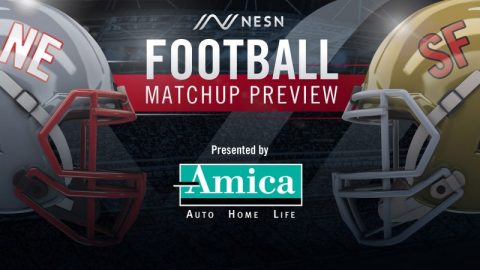 Will Patriots Get Passing Attack Back On Track? Matt Chatham Breaks It Down