Patriots Offense Shouldn't Be Hindered by Absence of Randy Moss in Battle Against Jets - NESN.com Skip to content FOXBORO, Mass. — At this point, it’s pretty well-established that the Patriots are a better team without Randy Moss, but Monday will be their first chance to test their Moss-less offense against the Jets’ high-octane defense.

The numbers indicate New England’s offense is better off without the future Hall of Famer. And even if there isn?t a big disparity in the yardage, the fact that the Patriots have averaged four more offensive points per game is pretty telling.

Monday will obviously be the Patriots’ biggest test. Sure, they’ve handled some stout defenses without Moss, including the Ravens, Chargers, Vikings and Steelers, and Deion Branch‘s late-game heroics against Baltimore — seven receptions for 75 yards and one touchdown in the fourth quarter and overtime, after just two catches for 23 in the first three quarters — displayed the type of mettle that Moss lacked in tougher situations.

That figures to pay dividends against the Jets. Regardless of whether or not Moss was still around, it seems as though the best matchup for the Jets would be to line up cornerback Darrelle Revis on wide receiver Wes Welker, and that?s because cornerback Antonio Cromartie handled Moss so well in Week 2. With that, the Patriots need to win the one-on-one battles against Cromartie, who will now likely line up against Branch or one of the rookie tight ends.

And what will the Patriots miss without Moss against the Jets? Well, maybe not a whole lot. Aside from his outstanding one-handed touchdown grab in Week 2, Moss had a terrible game and missed on a lot of chances. In the last two seasons, when head coach Rex Ryan changed the New York defense, Moss had 11 receptions for 96 yards and two touchdowns in three Pats-Jets games. That?s an average of about four catches and 32 yards per game.

So, the Patriots have done just fine without Moss to this point, and all signs indicate that trend will continue during Monday night’s division-deciding game against the Jets.

This was the last installment of a 10-day series that highlighted 10 reasons to get excited for the Patriots-Jets matchup Monday night.

Part 1: There are huge playoff implications on the line.

Part 2: It’s all about the trash talk.

Part 4: Will Wes Welker take his talents to Revis Island?

Part 5: Patriots test: Can they really beat the Jets?

Part 7: Are the Jets frauds?

Part 8: The Patriots’ rookies have keyed their improvement.

Part 9: What new defensive wrinkle will the Patriots use? 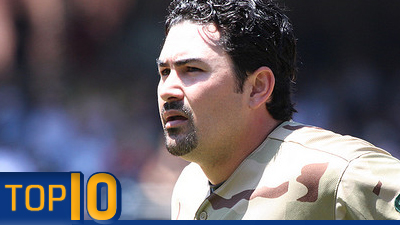