With Carl Crawford, Adrian Gonzalez Additions, Red Sox Prove They Mean Business in 2011 and Beyond - NESN.com Skip to content The New England Patriots are 10-2, sitting atop their division in December after a 42-point win over the rival Jets. The Boston Celtics are 17-4 and look like the best team in the NBA. The Bruins are operating at full steam and just got their best player back. Yet, none of those teams is creating the biggest buzz in Boston.

That’s because John Henry, Theo Epstein and Larry Lucchino are aggressively going out and getting their men this winter, and it’s created an offseason excitement around the Red Sox that hasn’t been seen since Curt Schilling and Keith Foulke were brought on board in the November and December of 2003.

The best part of all of this is how the Sox appear to have gone the extra mile to get what they want. Where they fell short on the bidding for Mark Teixeira, where they passed on trading prospects for Cliff Lee or Johan Santana or Roy Halladay, the Sox this time spent the extra money and gave the extra years in order to build the best roster possible.

The result? perhaps their best lineup in years.

While it’s impossible to replicate the back-to-back threat of Manny Ramirez and David Ortiz from 2003-08, this lineup 1-9 can certainly compete. With Jacoby Ellsbury, Dustin Pedroia and Carl Crawford atop the lineup, don’t expect too many 1-2-3 first innings. With Adrian Gonzalez batting cleanup, expect some runs to cross the plate early and often.

In going out and getting the 29-year-old Crawford, the team now has him, Pedroia, Youkilis, Gonzalez locked up for years to come. They’re all dynamic offensive and defensive threats, and Crawford adds the wild-card element of speed.

For now, people might worry that there are too many lefties in the lineup, that left field at Fenway is too small to let Crawford utilize his speed, that the Yankees will still likely get Lee, or whatever it is that people want to complain about. Perhaps they’re just stunned that the Sox, in the middle of the night, ensured they’d be having perhaps the best winter in their history.

It’s not all that dissimilar to what the Yankees did in 2008. After failing to make the playoffs in the final year of their historic stadium’s existence, the Yankees were embarrassed and upset. All they did that year was go out and sign the three biggest free agents available in CC Sabathia, A.J. Burnett and Teixeira.

All they did the next season was win the World Series.

While the 2011 title is up for grabs at this point in time, the Sox were clearly upset that they had to watch the playoffs from home. Perhaps all those cheap shots taken at Henry from afar that his money and attention would now be overseas with Liverpool made him want to make a statement. Or maybe the baseball operations team just saw a window of opportunity to make this team extraordinarily competitive for the next five years.

Whatever it was, the Sox got the job done this winter. Sure, there are bullpen pieces to add and maybe a backup or two for the bench, but in landing Gonzalez and Crawford in a matter of days, the Sox have done what they needed to do to make sure that the 2010 season does not repeat itself.

It’s an exciting time to be a sports fan in Boston. The TD Garden is rocking every other night, but the seasons for both of its occupants are early. The Patriots play their games for just three hours every week, but the Sox clearly have been playing theirs 24 hours a day.

The countdown to pitchers and catchers reporting is officially on.

Fan Forum: Will the Philadelphia 76ers Make the Playoffs This Season? 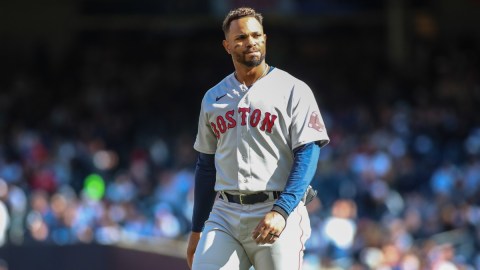