BOSTON — While they rehabbed together this past week, Bruins forward Milan Lucic and defenseman Mark Stuart talked about making a triumphant return together.

There was also a little friendly competition involved, as they set out to see which of them would score first upon their return to the lineup.

Lucic denied making any wagers beyond bragging rights, which turned out to be a good thing. The odds were against Stuart, considering the fact that he has just 12 goals in 278 career games, going scoreless in the 26 games he played this year before suffering a broken hand on Dec. 9.

Lucic, meanwhile, came into Monday's clash with Carolina still leading the Bruins with 16 goals this season despite missing the past three games with an undisclosed injury.

So naturally it was Stuart who opened the scoring with a one-timer from the left point 7:56 into the first period.

"Definitely, we walked about it yesterday and last week working out together that we wanted to come back and see who could score first," Lucic said. "But he definitely got it."

Stuart's one-timer from Nathan Horton ended up being the game-winner, but it was far from the final strike as Boston added six more unanswered goals for a 7-0 rout of the Hurricanes.

"I was just trying to get a shot off and get it on net," said Stuart, who added two hits, two blocked shots and was a plus-3 in 16:04. "I was a little nervous beforehand because you don't know what to expect. I think I was fortunate enough to get that goal early, and it kind of helped me relax."

The goal did put some pressure on Lucic, and he appeared to answer at 9:15 of the first. But Lucic's goal on a wrister from the slot was waved off because of a slashing penalty committed by Zdeno Chara behind the play. Chara redeemed himself by scoring the first of his three goals on the day on a 2-on-1 break as he left the box after the Bruins killed off the penalty.

"I have to build off of it," said Lucic, who was mired in an 11-game goal drought before his injury, but did chip an assist in 14:24 on Monday. "It was a little disheartening. It was a good, quick shot for myself. I was thinking, 'Here we go, let's get it going again.' Unfortunately it was called back. It was good to see Zee come out of the box and get it back for a 2-0 lead."

The rest of the Bruins were just glad to see Stuart and Lucic both back in the lineup.

"Seeing Stu back and Looch, it's always nice to see," forward Patrice Bergeron said. "I thought it showed today, you know, with the depth that we have."

One Bruin showed his support more directly, as Adam McQuaid jumped in to take on Carolina tough guy Troy Bodie late in the third period after Bodie and Stuart had gotten involved in a shoving match.

"We all know Stuey's been out a while and why he's been out, so in that situation you kind of have to jump in there for your teammate," McQuaid said. "We all know Stuart's not going to back down, so it was just something I needed to do."

Stuart couldn't drop the gloves himself, as he has to wear a brace to protect his injured hand for the next few weeks, and he was appreciative of McQuaid stepping in.

"I felt bad because I didn't want to put Adam in that situation," Stuart said. "But you kind of forget sometimes in the heat of the battle that you can't do it. So it's frustrating, but I thanked Adam for doing that for me." 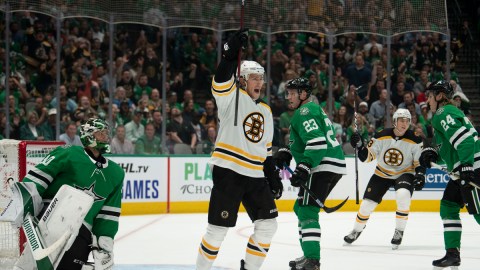 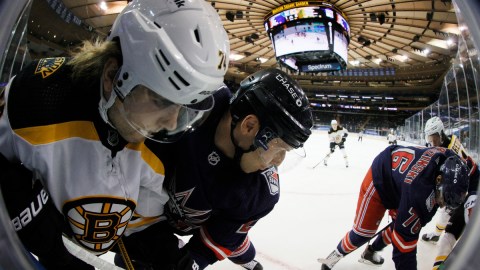 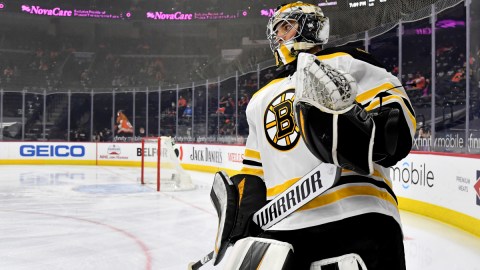