Roy Hodgson has asked for patience. He’s asked for the chance to leave his imprint on his side, for his tactics to be accepted. He’s asked for fan support, financial backing — the list goes on, and the results have only grown worse, and at this point, he pretty much has nothing left to ask for.

In the wake of Liverpool’s abysmal 3-1 loss to a Blackburn Rovers side that is nearly always uninspiring — a result eerily similar to those against Wolves, Blackpool and other teams Liverpool supporters can’t fathom losing to — one of two things must be true — or maybe both.

Either Liverpool’s squad is full of players who just aren’t very good, or Hodgson has been utterly incapable of making the team even a fraction of the sum of its parts.

It is said with relative frequency that this is nearly the same team as in 2008, yet this team is in 12th place, and that 2008 one finished second, but that may be a little unfair. The Sotirios Kyrgiakos-Martin Skrtel combination cannot hold a candle to the 2008 versions of Daniel Agger-Jamie Carragher in terms of class in central defense. Paul Konchesky is nowhere near the player that Fabio Aurelio was at that point, and the right back actually played defense in 2008.

David Ngog, also, wasn’t anywhere near the first team, and Maxi Rodriguez, Christian Poulsen and Joe Cole can’t be remotely be compared to the likes of Javier Mascherano, Yossi Benayoun and Xabi Alonso.

Their play is surely affected by the class of those around them, but even so, they just aren’t themselves. Their body language is poor, they seem disinterested, and they play with a lack of belief.

When great players appear as such for such an extended period of time, there’s no possible argument to make other that the manager is to blame.

Poor performance, of course, can often be condoned if the team seems to be giving an effort, playing fun, aggressive soccer, or at least showing signs of improvement. Those qualities, though, can be attributed to the likes of Wigan, Blackpool and Wolves — none of whom Liverpool beat, but not Liverpool.

Hodgson’s side, on the other hand, plays negative, low-pressure football normally displayed — ironically — by Blackburn Rovers. On Wednesday, Rovers surely didn’t look as such. Instead, they proved how poorly the strategy was working for their opponents. They gave Blackburn ample space to win balls in midfield and build down both wings, the results of which were countless crosses and three beautiful Blackburn goals.

So, if nothing is working, why maintain the status quo — especially in the midst of the transfer window?

Hodgson’s philosophy is one of negative football. That may have worked at Fulham, but it has proven to be disastrous at Anfield, and any attempt on his part to “leave his imprint” as such could only prove more catastrophic. It’s not as though he hasn’t had a chance to bring players in. He did so with Cole, Konchesky, Poulsen and others, and they’ve generally proven to be exactly what he is — negative in approach and performance. The team clearly must spend in January, but it would be dangerously profligate to allow the team to waste money in its current direction. Something must change.

Many considered the last-gasp Bolton win to be a stay of execution for Hodgson. Then, as usual under Hodgson, the next match came, and the team looked dead.

It is, of course, never a certainty, but it would be a surprise to many if that stay of execution wasn’t short-lived — even Mr. Hodgson could have few words to the contrary.

Should Roy Hodgson remain as Liverpool manager? Leave your thoughts below. 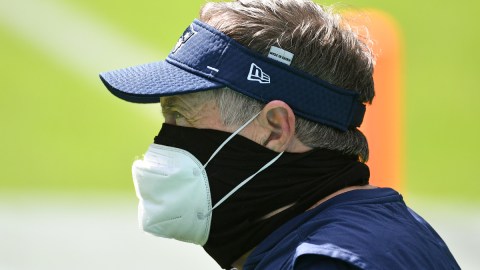