Jordan Caron Will Benefit from Developing in Providence, But Bruins Now Lack Competition for Playing Time Up Front - NESN.com Skip to content The reasoning behind the Bruins' decision to send Jordan Caron back to Providence on Monday is easy to decipher and defend.

The message to the rest of the team is where things could get problematic.

The first-year pro's long-term development is better served logging big minutes in all situations down on the farm than in playing a limited role on the fourth line with the big club. Caron had played just 7:07, 12:12 and 6:21 in his three games up with Boston in this latest stint, and he wasn't exactly thriving in that role.

Caron, 20, was a minus-1 with no points, shots or hits in the three games. He has the size (6-foot-2, 202 pounds) and defensive awareness to play on an energy line with Greg Campbell and Shawn Thornton, but that isn't a role he's best suited for. He has the ability to do a lot more, and showed that in first stint with the team when he made the club out of camp. Caron put up 3-4-7 totals and a plus-4 while averaging 13:17 a game over 20 contests before being sent down in early December.

After a slow start in Providence, he was emerging as one of the P-Bruins' top-scoring forwards while remaining a solid two-way player, and the Bruins are better served by letting him resume that development in Providence.

The only issue with the move, which follows Zach Hamill's return to Providence following Sunday's 4-2 loss in Detroit, is that it leaves the Bruins with just 12 forwards on the roster. That includes Daniel Paille, whose four-game suspension is up. He will be back on the fourth line Tuesday when the Bruins host Toronto, immediately regaining his spot despite his limited effectiveness much of this season.
There will be no need to scratch anybody up front. There is no longer a direct competition for playing time on the forwards lines. The threat of putting an underperforming player in the press box for a game is no longer there.

Bruins coach Claude Julien didn't exactly take full advantage of that option when he had it. Other than Paille, no veteran forwards have been relegated to press-box duty when healthy this year. But Julien has used the carrot and stick approach with youngsters like Tyler Seguin to some effect.

Seguin was scratched once in December and responded with an assist and a solid all-around game against Montreal upon his return. Last week, Seguin was held out again for two games, and scored Boston's first goal in Sunday's loss. He also missed a defensive assignment that led to the Red Wings' go-ahead goal, so not everything was solved by watching a couple games from the ninth floor, but his overall effort was improved.

But now Seguin, and Paille and Blake Wheeler and Michael Ryder and any other forward you can name, will know there's no threat of being forced to trade in their jersey for a suit for a night regardless of how they play. Sure, they can see their ice time limited, as Julien has been much more proactive this season in shortening his bench late in close games, but the ultimate threat of being taken out of the lineup is gone.

This can all change in a heartbeat. Peter Chiarelli could shuttle in the next warm body from Providence at any moment and another youngster could be on hand to push for playing time. Chiarelli could also be clearing roster and cap space for a move to bring in help from outside the organization with the trade deadline just two weeks away.

But for now, there's 12 forwards on the roster, 12 spots to fill on game night and 12 players who might just feel a little more comfortable in their positions than they should coming off three losses in the last four games and a humbling home-and-home sweep at the hands of the Red Wings. 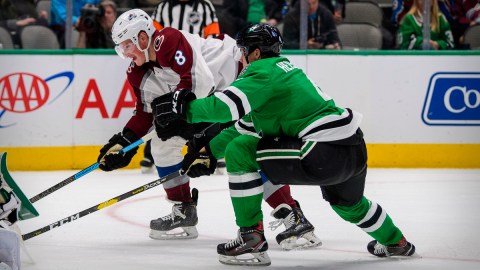