LOUISVILLE, Ky. — Kyle Kuric scored 12 points, including two big baskets in overtime, to lead No. 16 Louisville past No. 4 Pittsburgh 62-59 on Sunday.

Kuric had a potential game-winning layup blocked at the end of regulation, but atoned by hitting a 3-pointer early in the extra session then adding the clinching dunk with less than a second on the clock.

Then things got a little bizarre.

The clock didn't stop after the basket, which put the Cardinals up 62-57, and the horn sounded. Some Louisville cheerleaders on the baseline raced onto the floor, with one male cheerleader grabbing the ball and tossing it in the air.

Officials called Louisville for a delay of game technical foul and put .5 seconds back on the clock. Pitt's Ashton Gibbs knocked down two free throws and the Panthers had one last chance to tie, but Gibbs couldn't get off a desperation heave in time.

Peyton Siva led the Cardinals (22-7, 11-5 Big East) with 14 points and Mike Marra added 11 off the bench for Louisville, which remained unbeaten at home in conference play and knocked off a top-five team for the second time this season.

Gilbert Brown scored 20 points and Brad Wanamaker had 13 points, 12 rebounds and six assists for the Panthers (25-4, 13-3), but Pitt turned it over three times and missed all three of its field goal attempts in overtime.

The most painful miss came with about 5 seconds to go when Wanamaker passed up a 3-pointer with the Panthers trailing by three and tried to hit Brown under the basket instead. The ball rolled out and Louisville's Terrence Jennings came away with it.

Jennings hit Siva with an outlet pass, who fed Kuric for the dunk.

Gibbs' final heave was a fitting end to a tough day — he finished with 14 points on 3-of-11 shooting.

The Cardinals played the nation's best rebounding team even on the glass. Pitt, whose plus-11 rebounding margin is tops in the country, outrebounded the Cardinals by just one, 39-38.

Still, the Panthers had their chances thanks to Wanamaker, who did a little bit of everything. He hit three big shots in the second half as Pitt erased a 12-point deficit to tie the game three times in the final 3:37.

Siva drove the lane but his shot was swatted out of bounds by Gary McGhee. The Cardinals ran a back screen for Kuric, who hit a game-winning layup against Marquette from the same spot Jan. 15.

Not this time. Wanamaker swallowed it and sent the game to overtime.

Kuric hardly looked bothered. He calmly drilled a 3-pointer on Louisville's second possession of the extra period, and the Panthers self-destructed.

Brown was called for a charge, then Siva swiped the ball from Travon Woodall. Officials called McGhee for traveling on Pittsburgh's next trip, allowing the Cardinals to continue to drain the clock.

Pitt's second loss in its last three games means the Panthers have just a one-game lead over Notre Dame heading into the final week of the season. The Panthers travel to South Florida on Wednesday and close the season at home against Villanova on March 5.

Pitt will need to finish ahead of the Irish in the standings to win the title. Notre Dame beat the Panthers 56-51 on Jan. 24.

Louisville held its own against the bigger, stronger Panthers from the outset. The Cardinals extended their matchup zone in an effort to get Gibbs out of rhythm, and it worked.

He missed all five of his field goal attempts in the first half. Then again, his teammates weren't much better. Pittsburgh went more than 10 minutes without a basket as Louisville built a 24-12 lead.

Wanamaker ended the drought with a runner, and for a brief moment, the Panthers woke up. They closed to within 26-22 on a jumper from Brown, but Marra responded with a 3-pointer and Siva added a pair of free throws just before the horn to give Louisville a 31-22 lead at the break. The nine-point deficit was the second-largest for the Panthers this season, behind a 12-point hole they faced in a loss to Tennessee back in December.

Wanamaker almost led the Panthers all the way back. Almost. 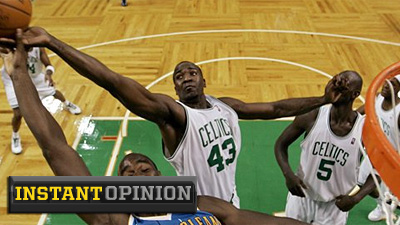