It’s been a bittersweet week for the Celtics in just about every way. Everywhere you look, you find the C’s forced to take the bad with the good.

They recorded an impressive win Sunday afternoon over the Magic — but they sandwiched it in between disappointing losses to Dallas and Charlotte.

They were thrilled to see Kendrick Perkins in the starting five, and Delonte West setting a return date — but they also lost Marquis Daniels to a horrifying spinal cord injury.

They watched Ray Allen get within one 3-pointer of equaling Reggie Miller for the all-time record — but then when it mattered, they needed one more three to overcome the Bobcats on Monday night.

Nothing’s ever good enough when you’re fighting for the best record in the Eastern Conference. These days, every rose has its thorn.

Here are seven thoughts on a Celtics team that’s battling to tread water this February.

1. Ray Allen fell short of tying Reggie Miller on Monday night, making two 3-pointers in the Celtics’ loss when he needed three to reach the elusive 2,560 milestone. But it’s not all bad news — by putting the record off until Thursday night, he ensured he’d be able to tie Miller at home, when the C’s take on the Lakers. And what’s more, Miller will even be in the building to see it. The C’s and Lakers will do battle on TNT and Miller will be at the broadcast table announcing the game. Now that is good TV.

2. Marquis Daniels will be out for at least a month, possibly two or more, as he takes some time to rest after his spinal cord injury suffered Sunday. Without Daniels, the C’s would appear at first glance to be lacking a suitable small forward to back up Paul Pierce. But that may not be true — there’s one name we’re all forgetting, and that’s Luke Harangody. The Notre Dame alum has been solid when he’s played in his rookie season, knocking down shots when open and hustling for rebounds and loose balls. Much like Daniels, he’s an efficient player who quietly avoids making mistakes, and he should see more minutes in Daniels’ absence.

3. Before Friday night’s game, when the C’s lost in the final seconds to the Mavericks, both head coaches gave a plug for Mavs forward Dirk Nowitzki to win his second MVP award. The Celtics’ Doc Rivers said he was “back to his old form” and put him among the frontrunners with Derrick Rose and LeBron James; Dallas’ Rick Carlisle said he was the clear favorite, as he’s had the greatest impact on his team. Dirk won his first trophy in 2007, and he’s got a good shot at No. 2 in 2011.

4. As many had expected, the Celtics landed four reserves on the Eastern Conference All-Star team at Thursday night’s selection show. It’s an impressive feat for all four guys (Allen, Pierce, Kevin Garnett,  and Rajon Rondo), but most of all for Garnett. The Celtics’ forward has now been named an All-Star in 14 consecutive seasons, which ties an NBA record. Only KG, Jerry West, Karl Malone, and Celtic teammate Shaquille O’Neal have made the cut 14 years in a row. (But to pass Kareem Abdul-Jabbar for the most total selections, KG would have to keep making the All-Star team until 2017. Good luck.)

5. You know how much snow Boston has gotten this winter? Here’s how much — it’s in between the height of Nate Robinson and the height of Shaq. The Globe has set up an interactive graphic that compares the total snowfall to the heights of the two Celtics stars — at the moment, the scoreboard reads Shaq 85 inches, snowfall 70.7, and Nate 69. Winter’s not over yet, though, so Shaq might lose this fight yet.

6. Shaq might be out of commission, but the Celtics haven’t suffered one bit on the glass. Why? Because Kendrick Perkins has had a tremendous start to his season rebounding-wise. In his first three games as a starter, Perk has pulled down 32 rebounds in just about 100 minutes, which comes out to about 11.5 per 36, one of the best seasons of his career if he keeps it up. For comparison, Shaq has averaged 8.5 boards per 36 during his time as a Celtic.

7. The Celtics have no reason to be afraid of taking on the Lakers on Thursday night, and that’s not only because they beat them a week ago in enemy territory. The other reason? L.A. has been terrible this season against top-notch competition. If you take only the seven NBA teams currently over .650 in winning percentage — San Antonio, Boston, Miami, Dallas, L.A., Chicago and Oklahoma City — you’ll notice something pretty telling. The Celtics are 7-4 against that group, proving their big-game mettle; the Lakers are 2-6.

To be the best, you’ve got to beat the best. Both teams will be dying to earn a win on Thursday night. 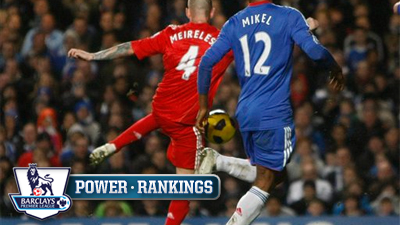