Preseason prognostications for this year's World Series keep coming back to two teams — the Red Sox and Phillies. With that in mind, sports simulation website, WhatIfSports.com, is already looking ahead to a Fall Classic featuring Boston and Philly.

The site simulated a seven-game series between the two teams 255 times, and the old adage rang true — pitching wins championships. That's why, when it's all said and done, the Phillies came out on top. Of those 255 series, Philly takes 188.

Even in the far-off world of computer simulations, Phillies pitching is still really, really good. In one simulation, the Phils take the World Series with a decided 4-2 edge, behind gems from Roy Halladay, Cliff Lee and Roy Oswalt.

In that simulated scenario, Lee brings it, not surprisingly, in both of his starts. A Game 2 shutout helps the Phillies build a 2-0 series lead, and then Lee comes back to slam the door in the deciding Game 6.

Luckily, though, for Red Sox fans another old adage rings true. Baseball games — and especially World Series — aren't won on paper. And they're certainly not won on computers. 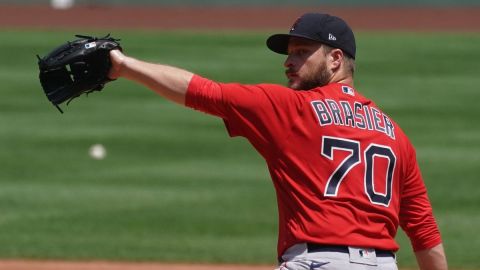