If you're white and a fan of BET, then Charles Barkley has a suggestion for you.

Barkley recently made the transition to college basketball coverage, serving as a commentator on the reality network that was covering a portion of March Madness.

He joined KNBR radio San Francisco to discuss the channel and the Madness on Monday, and, as always, he was very quotable.

When asked about truTV, Barkley gave the following monologue:

"Well once I found out we were going to be on truTV. They actually have a show called?first of all?truTV is really the white BET, truTV is white entertainment television," Barkley explained, according to SportsRadioInterviews.com.

"Dude, it?s some of the craziest stuff I?ve ever seen in my life. They got this one show called ?Lizard Towing,? Well they got these two big old boys from the south who be repossessing people?s cars and they end up chasing them down the street, fighting them every week."

"It is hilarious. These guys sneak into people?s houses. First of all, they seem like great guys, but they two big old country boys and they be stealing people?s cars back. It is the funniest thing in the world. They have people fighting with them all of the time. You?re just laughing the whole time. I?m telling you dude, it?s like white black entertainment television."

Most of Barkley's time on the network, however, wasn't spent repossessing cars, but instead ripping the "Big Least" — usually to Rick Pitino's face. According to Barkley, the Louisville coach didn't have a problem with it.

"No, you know, he [Rick Pitino] was like 'you know it?s never personal.' I think one of the reasons? you know our job on the TV and radio is to be honest and fair."

Still, he stuck by his "Big Least" guns.

"You know, they?re talking about Butler only playing in the Horizon League ? that?s just east coast bias trying to talk to us into thinking everything on the east coast is the best thing since sliced bread. It?s really not to be honest with you.?

Barkley's biggest gripe, however, was with the NCAA tournament selection process, particularly that those making the selections hadn't watched enough basketball.

"In my opinion?so wait let me get this straight? you?re telling me athletic directors around the country have really watched more basketball than we have? Which is crazy."

"We have on record two of those A.D.'s saying 'they only watch the teams that came to play their school.' Of course they?re not watching a lot of college basketball."

Barkley will be back on the set for the Final Four this Saturday. As for his picks, he's going with VCU and Kentucky. 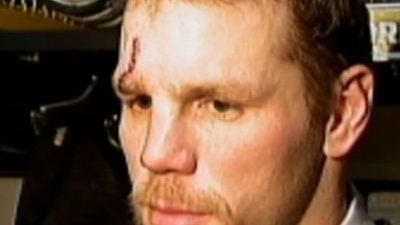 Shawn Thornton Gets More Than 40 Stitches, Some Classless Comments From Chicago Bench After Taking Skate to Face