Watching the Bruins’ game in real time on Tuesday night, it was easy to miss Brad Marchand‘s hit on R.J. Umberger. That is, of course, unless you are Umberger.

The Blue Jackets forward was upset over a hit that took place midway through the second period of the Bruins’ 3-2 shootout win in Columbus. Umberger turned his back in the neutral zone to try to corral a bouncing puck, when Marchand’s elbow appears to have made contact with Umberger’s head.

The referees either deemed there to be no penalty or missed the call. Umberger, described as “not pleased” by The Columbus Dispatch, didn’t speak out against Marchand personally but did say it should have been a penalty.

“I haven’t seen [the replay], but I’ve heard [Marchand] might have left his feet with an elbow. That’s what it felt like,” Umberger said, according to the newspaper. “You got to think that’s one of the hits we are trying to eliminate, whether it’s inadvertent or not.” 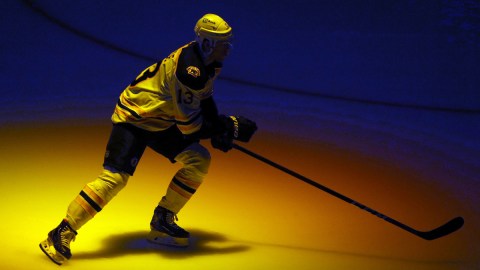