The Red Sox will wrap up a nine-game road trip on Thursday night in Baltimore when they look to avoid a three-game sweep at the hands of the Baltimore Orioles. The series finale will mark the return of both Marco Scutaro and Jarrod Saltalamacchia to the lineup.

It shouldn't come as much of a surprise to see either in the lineup. Saltalamacchia hasn't started behind the plate since the series finale in Anaheim on Easter Sunday, while Sctuaro has been called upon for pinch-hit duties in both games in Baltimore, but hasn't started since Sunday, either.

Sctuaro's return to the lineup probably hinges strongly upon his success in the past against Baltimore starter Brad Bergesen. The Red Sox shortstop is hitting .316 (5-for-19) in his career against the right-hander. Salatalamacchia has also had success, albeit in very limited action, with a pair of knocks in his only two career at-bats against Bergesen.

J.D. Drew, who will hit seventh and play right field, also has a fair amount of success against Bergesen. He's hitting at a .368 (7-for-19) clip in his career against him, with two home runs and four RBIs.

Jon Lester will look to continue his career dominance against the O's, as he puts a 13-0 career record against Baltimore on the line at Camden Yards. Lester is 8-0 with a 2.50 ERA in his career at Oriole Park. The one Oriole who does seem to hit the Sox lefty well, however, is young catcher Matt Wieters who enters Thursday's game with a .381 (8-for-21) lifetime average against Lester.

Here are how both teams will start: 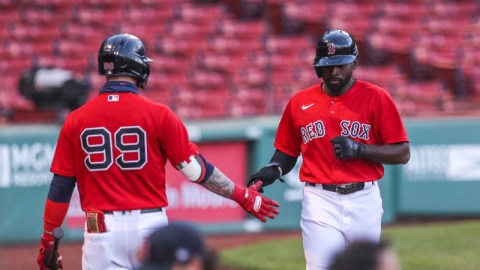