Bruins Embracing Chance to Live Out Childhood Dreams of Playing for Cup in Game 7 of Final - NESN.com Skip to content VANCOUVER — It's a chance to live out a dream that every kid who ever picked up a hockey stick has fantasized about.

After a grueling two-month postseason grind, the Bruins have a chance to finally lay claim to the most cherished trophy in sports. All they have to do is win Game 7 of the Stanley Cup Final. Oh, and they have to do it in Vancouver on Wednesday night.

"It's a great feeling," Bruins veteran forward Mark Recchi said. "We battled hard [Monday in a 5-2 win in Game 6]. We came to play and it's coming down to one game. This is what we dream of, when you're little kids playing street hockey, you're in Game 7. We're going to go up there and we're going to go lay it on the line like they are, and I think it's going to be an exciting game. It's been three close ones up there and we've got to find a way to win a game to win a Stanley Cup, and we're going to do whatever we can."

What they have to do is find a way to translate their dominant home performances to Rogers Arena, where they have managed just two goals while losing three games to the Canucks in this series.

"It's going to be tough," Bruins forward Brad Marchand said. "You know we seem to be able to build a ton of energy off our crowd [at the Garden]. So we're going to have to find some way to do it [in Vancouver], and just, you know, use each other to get up and try to build some energy off that and hopefully that's enough."

It hasn't been enough in their first three attempts to win in Vancouver, but the Bruins are confident the fourth time will be the charm for their first Cup since 1972.

To do it, the Bruins will need to take the same approach they've used in Boston, where they've set a physical tone and used their speed to keep the Canucks on their heels. They haven't been nearly as aggressive in Vancouver, where the Canucks were able to dictate the pace with their physical play.

"I think we need to relax," Bruins forward Milan Lucic said. "I think the last three games there, we played sort of tense, we weren't making the same plays that we were here at home, and if we're able to relax and just focus on our game plan, it will be a success."

Jumping out to an early lead would go a long way toward relaxing the Bruins. The team scoring first has won every game in the series, and the Bruins would like nothing better than to quiet the Rogers Arena crowd with a quick tally or two.

"We have to make sure that we have a good start," Marchand said. "And [the Canucks] just seem to get so much momentum and energy off their crowd, and we just have to find a way to counter that and come out strong."

An early goal could also rattle Vancouver goalie Roberto Luongo, who has been fantastic at home (two goals allowed in three games, including a pair of 1-0 shutouts) and horrific in Boston (15 goals in less than six periods, as he's been pulled twice).

The Bruins are expecting to get the good Luongo going against them in Vancouver on Wednesday, which makes the challenge facing them even more daunting.

Even with Luongo getting the hook in the first period after giving up three goals on just eight shots in Game 6, the Bruins don't think they've gotten inside Luongo's head.

"No not at all," Marchand said. "He's able to shake games off like it's nothing. And you know he's bounced back so many times and he's so tough to play against in Vancouver. So you know he's going to brush this off, he'll definitely bounce back from this."

The Bruins have shown an uncanny ability to bounce back from every setback and overcome whatever adversity they've faced. They've done that in this series, rallying from a 2-0 series deficit to win Games 3 and 4, then rebounding from their Game 5 defeat to force this final showdown with Monday's win.

But even with that track record of clutch performances and a pair of Game 7 wins already this spring, playing one game with the Cup on the line can cause equal parts excitement and anxiety.

"I'm trying not to think about it because I'm getting nervous already," Marchand said about Game 7. "It's an unbelievable situation. It's one you always dream of growing up. It's going to be a tough game, though. Everybody has to make sure we're ready for it."

NBA Season Brings Great Intrigue, Anticipation, But Lockout Threatens to Spoil It All 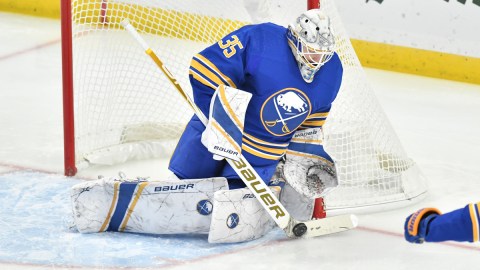