Patriots fans remember Osi Umenyiora as one of the Giants' pass rushers who had Tom Brady running for his life in Super Bowl XLII. (Sorry to re-open old wounds, Pats fans.)

Those who watched the historic upset in 2008 could clearly see how important applying pressure to the quarterback is in disrupting a prolific offense. Brady was sacked five times that night and knocked down on numerous other occassions, never able to establish a rhythm.

Now with word that Umenyiora has not reported to Giants training camp amid a contract dispute, it appears No. 72's days with Big Blue might be near an end.

Could Osi find a home in New England? Nothing has been reported that would indicate such a move, but when looking at the pattern of moves in the past few days, it's not a stretch to imagine Umenyiora in Foxborough.

First, let's examine Umenyiora's situation with the G-Men. The 29-year-old is unhappy with Giants general manager Jerry Reese for what he says is a broken promise. According to Umenyiora, he and Reese had a discussion about his contract prior to the 2008 season in which Reese told him he would renegotiate his contract in two years if the defensive end was still playing at a high-caliber level. Umenyiora has yet to receive a new contract from New York, which infuriated him enough to file an affadavit spelling out the conversation he had with Reese and his desire to sign a new deal or leave the team.

Publicly Reese has let Umenyiora's words slide, but one thing has remained the same: The Giants have not given the defensive end a new contract. In response, Umenyiora has been a holdout at camp, and teammate Justin Tuck doesn't expect that to change anytime soon.

"He?s gonna have to do what?s best for him," Tuck told Mike Mazzeo of ESPN.com when asked of Umenyiora's future. "I don?t know what the speculation is, but I hope he finds his way to be a Giant next year, and if he doesn?t I wish him luck in anything he does."

Though Umenyiora is being fined $30,000 per day for not showing up to camp, when asked if he expects his teammate to show up without a new deal worked out, Tuck responded, "No, I don't."

Clearly there are some issues between the Giants and their 2003 second round draft pick, enough issues that Umenyiora could be let go by the Giants, according to ESPN's Adam Schefter.

"The Giants have said that they are not going to cut him. John Mara, the Giants owner, has said that," Schefter said on SportsCenter earlier this week. "However, there have been rumblings around the league that Osi Umenyiora would be on the bubble. I think he?d like to be released to be able to shop his services to another team.

"Remember, he criticized the Giants organization in testimony that he gave to the courts and was one of the named plaintiffs in the Brady v. NFL case," Schefter continued. "Again, not saying he winds up getting cut, but there are people around the league who think he could get cut."

Whether rumblings of Umenyiora being cut are true, it's evident he wants a new deal or wants out of the Giants organization. Umenyiora's affadavit says he wants to be paid like a top-five defensive end, which would put him well above the $8 million he is owed over the next two years. But the Giants might have trouble paying Osi that money, considering the team already has $126 million under contract and will have to be tight to remain under the salary cap of $120 million. That could mean Umenyiora becomes expendable.

So if he is cut or traded, where would a good landing spot be for Umenyiora?

How about New England?

The Patriots were unsuccessful in applying quarterback pressure last season, allowing the third-most passing yards and finishing dead last in third down efficiency, the down where teams are most likely to throw the ball. The Pats player with the most sacks last season was Mike Wright, who finished with 5.5, the 48th-highest total in the league. Tully Banta-Cain and his five sacks were released by the team along with Ty Warren, who had 20.5 sacks in seven seasons with New England. There is a definitive need for a pass rusher on this team, especially from the edge.

A concern many might have with Umenyiora in New England is a scheme change considering the Giants usually play a 4-3 defense while the Patriots are a 3-4. With only three down lineman as opposed to four, a defensive end's responsibilities change in the 3-4 and often include more gap control rather than purely getting to the quarterback.

While this is a factor to consider, also consider that the Patriots used sub packages a lot last season that included more than just three down lineman. Add to the fact that the team acquired Albert Haynesworth, a big 6-foot-6, 335-pound lineman who plays best in a four-man front, and it's not a stretch to imagine the Patriots employing more 4-3 looks in 2011. Warren cited such a shift in his comments after being released. That allows for defensive ends to focus on getting to the quarterback, which is what Umenyiora does best.

With the speed at which NFL transactions have taken place over the last few days, it is impossible to get a read on what will happen with Umenyiora in New York. The Giants could very well settle their differences with the rusher and have him report to camp by next week. If Umenyiora is on the way out, however, the team in Foxboro could use a guy who has 60 sacks and 28 forced fumbles in seven seasons. 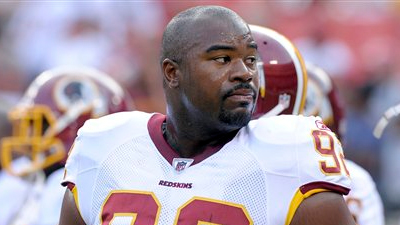