The Patriots acquired the king of the Twittersphere this offseason in Chad Ochocinco, who apparently happens to be a pretty decent football player, too.

According to Busted Coverage, Ochocinco is just one of three Patriots who are "must follows" on Twitter. Check out the list — and explanations — below.

Chad Ochocinco, @Ochocinco
"Had to get him out of the way earlier. The guy was tweeting pics of a pregnant pigeon on his roof for gods sake. He may be a bit toned down now that he?s under the watch of Bill Belichick and the Patriots but Chad is always good for some entertainment."

Rob Gronkowski, @RobGronkowski
"This young Patriots tight end is definitely entertaining. He was seen numerous times partying in Arizona during the lockout and is not shy about his tweets. He once wished Kate Upton happy birthday via Twitter and asked if she wanted some birthday spanks. That right there should be enough to keep this guy on your radar."

Brandon Meriweather, @BMeriweather31
"Meriweather has been known as a hot head throughout his young career. He doesn?t go too wild on Twitter, but you never know with some of these characters. Aside from that, he tweets some pretty funny stuff and posts some cool behind the scenes pics that you wouldn?t be able to see elsewhere." 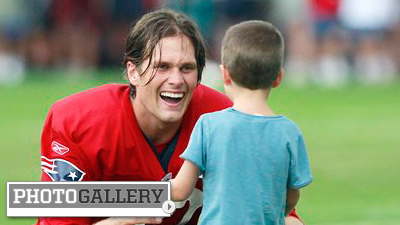