The Bruins acquired Nathan Horton a year ago with the hope of finally finding a scorer with size for their top line.

There were some bumps along the way, but Horton delivered a solid regular season. Then, playing in the playoffs for the first time in his seven seasons in the NHL, he proved to be a better clutch scorer than anyone could ever have envisioned.

Horton scored eight goals in 21 postseason games. Those tallies included a double-overtime winner in Game 5 of the opening-round series against Montreal, followed by an overtime goal to win Game 7 four nights later. He was the hero again in Boston's next Game 7, scoring the only goal midway through the third period of a 1-0 win over Tampa Bay in the conference final.

Those goals pretty much ensure that Horton will never have to pay for a beer again in the greater Boston area. But they also raised expectations even higher for what he can do for an encore in his second season with the Bruins.

Horton isn't shying away from the challenge, and sees room for improvement now that he's gotten acclimated to playing in Boston and playing with linemates David Krejci and Milan Lucic.

"You build chemistry throughout the year," Horton said at the club's breakup day. "I definitely think that through the year we got better. We played better in the playoffs together. They're two amazing players. We can be better through the regular season, that's for sure, and we want to. We want to get better, and that's what's going to make us better."

Upon his arrival in Boston last year, Horton expressed a similar desire to improve his game. His goal was to get more involved physically, knowing that playing with an edge brings the best out of him.

"When I'm on my game, I'm more involved in the play, and that's what I plan to do when I come to Boston," Horton said the day of his trade. "I definitely want to be more physical. All around, I want to be a better player. I think I have more to give."

Horton backed those words with actions, especially in the second half of the season and playoffs. After getting off a strong start with 8-10-18 totals (along with 20 hits and 25 penalty minutes) in his first 17 games as a Bruin, Horton suffered through a prolonged midseason slump with just 4-6-10 totals over the next 31 games. He also had just 17 hits and 18 PIMs in that stretch, but he never lost confidence.

"I was getting opportunities even when I was in that slump there [in the middle of the season]," Horton said after the season. "I was still working hard. Sometimes it just doesn't go in, but I stayed positive as much as I could. When it does start going in you get a little more confident and feel if you shoot it's going to go in again. That's kind of how it went. When you feel confident you do a little more and it all comes together."

It came together for Horton when he got back to playing more physically. He finished the regular season strong with 14-11-25 totals, along with 37 hits, 42 penalty minutes and four of his career-high seven fighting majors in the final 32 games. Those fights were more than the six he had over the course of his six seasons in Florida combined, while his 74 hits more than doubled the 34 he had in his final year as a Panther.

"He has kind of gotten himself in a zone, that every game he plays, he plays with an edge and that's the way he's been successful," Bruins coach Claude Julien said at the end of the regular season. "I think he's just got to keep playing with that edge. He's a pretty scary individual — a big, strong, imposing player. And if he plays with an edge it certainly makes the other team look over their shoulders."

Horton maintained that edge in the playoffs, even though he was looking over a separated shoulder of his own for much of the postseason. He still managed another 33 hits and even dropped the gloves against Philadelphia's Sean O'Donnell in the second round. Horton re-aggravated the injury on a hit from Nate Thompson early in Game 7 against the Lightning, but still returned to score the game-winner.

"Not only do you people learn a lot about Nathan because of that, but so did we as an organization," Julien said. "When you bring someone like that in, and as the season goes on, you see how he changed. And I don't know if you have noticed, but to me he became more and more of a consistent player in the second half and [was more] physical and emotionally engaged. And I thought he really grew as a player this year with us, and that just carried over into the playoffs. And that's why there was no way you were going to keep him out of the lineup, even with that shoulder separation."

Horton played through the pain of the shoulder injury, but was finally stopped by a concussion suffered from a late hit by Vancouver defenseman Aaron Rome in Game 3 of the Cup Final. Horton is expected to be fully healthy for the start of camp. The shoulder did not require surgery and he was already reporting no remaining symptoms from the concussion at the club's breakup day in June.

But as the Bruins have learned firsthand in recent years, concussions can be tricky things. Will Horton still be able to play that aggressive style, or will he be more cautious to avoid suffering another head injury? He needs to play that style to be at his most effective, but the Bruins need him to stay healthy above all.

Balancing those needs will be his biggest challenge in the upcoming season, but Horton has already set some lofty goals after his first taste of postseason action produced such a memorable result.

"It's really true what they about the playoffs," Horton said. "It's a grind, but at the end of day it's what everybody plays for — the Cup. We have it, and we want to keep as long as possible."

Wednesday, August 3: Who will be the biggest challengers to the Bruins in the Eastern Conference this season? 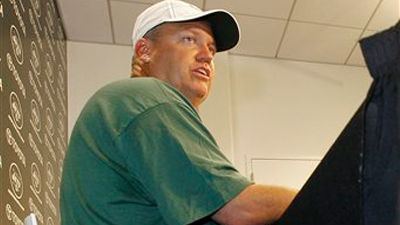 Rex Ryan Pleads With Other NFL Teams to Beat Patriots