BOSTON — In every year of coach Claude Julien's tenure in Boston, at least one rookie has emerged in camp to win a job and play a key role on the team in their first season in the league.

Milan Lucic did it in Julien's first season in 2007-08. Blake Wheeler followed suit in 2008-09, while Tuukka Rask and Johnny Boychuk made the leap in 2009-10. Last year, Brad Marchand, Tyler Seguin and Adam McQuaid earned spots in the preseason and contributed to all the way through Boston's run to the Cup.

But this season, the rookies in the Bruins' camp are faced with a much more daunting challenge in trying to stick around in Boston. There are few openings available with nearly the entire roster from last year back intact. And with the Bruins winning their first championship in 39 years with that lineup, there aren't exactly a lot of weak links that could be upgraded with the addition of an untested rookie.

Still, there is some very strong young talent on hand in this camp, and Julien has shown repeatedly that he is willing to give a youngster a shot if he earns it. So there's a good chance that at least one rookie will be pulling on a spoked-B when the regular season opens on Oct. 6. But which of those talented youngsters is best positioned to claim a job in Boston?

The best prospect in camp might be defenseman Dougie Hamilton. The Bruins' top pick this June (ninth overall) has already impressed with his skating ability and he has the kind of size so many of Boston's blue line prospects lack. But Hamilton still needs to fill out that 6-foot-5 frame, add strength and more seasoning.

His time will come, but it's at least a year away, and likely a couple of season with the steep learning curve on defense at the NHL level.

Forwards Ryan Spooner and Jared Knight are closer to being ready as they enter their second camps. Both impressed in their first looks last year, especially Spooner, who was among the final cuts made. Julien certainly has high hopes for both the slick playmaker Spooner and aggressive winger Knight. He doesn't doubt either will eventually make the NHL, but this year? That might be asking a bit too much of the youngsters.

"When a guy comes in for his second year, he's had a taste of it the year before," Julien said. "He's more confident. He's not as intimidated, not so much in awe. And I think those two guys are basically going through that stage where they're not in awe as much as they were last year and they feel more comfortable.

"They're not afraid to go into the corner and battle with veterans and showcase their strengths and stuff like that, so I see two guys that are obviously more comfortable, and again that's just part of the process of growing, being bigger, stronger, more mature and more comfortable," Julien added. "Both of those guys, to me, are guys that I can't see not playing in the NHL some day. They've got all the goods. It's up to them to keep working at it."

If Hamilton, Spooner and Knight all end up heading back to junior for another season, who does that leave to carry the torch for this year's rookies? It could just be a familiar name, as 2009 first-round pick Jordan Caron should be the one ready to make the leap this season.

Caron actually made the team ahead of schedule out of camp last year, and he didn't look out of place with 3-4-7 totals in 23 games with the big club before being sent down to Providence. Caron struggled a bit after his demotion, but played well down the stretch and gained some valuable experience practicing with Boston as a Black Ace during the Cup run.

Now he's back a year older, stronger and wiser and ready to stick around for good with a solid camp. Last year's showing certainly has put the 6-foot-3, 204-pound winger on Julien's radar.

"He's certainly is a guy that caught my attention a little bit because he's got good size," Julien said. "He seemed to be skating well and that's what he did last year as well. He was skating well and then had good jump and hopefully with a year of experience at the pro level now he's able to maintain that jump. He's a pretty smart player. He's got good hockey sense and you see his reads are pretty good. He's one of those guys battling for a job and we're certainly going to keep a close eye on him."

Spooner and Knight won't make the decision process easy for Julien, but Caron should be the one to continue the annual tradition of an impact rookie making the Bruins out of camp.

Which rookie has the best chance to make the Bruins out of camp this year? 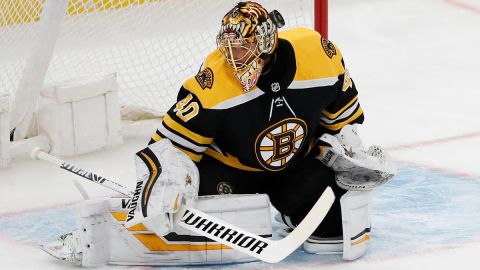