Hello everyone. Thanks for sending in the questions. As always, there were many (too many to tackle here, but check us out on twitter: @NESNSoccer for some rapid-fire answers) so let's just get to them now.

I am a Boston fan living in Philadelphia. I have been interested in European Soccer for many years, especially the Premier League. But I have never had any stake or investment in any specific team. Can you please give me some reasons as to why I, and some other Boston fans not familiar with English Premier League Soccer, should devote ourselves to Liverpool? It would be greatly appreciated in choosing sides! Thanks.
- Elliot, Philadelphia, Pa.

Hi Elliot, thanks for the question. It's not my style to tell you who to support. But if you're looking for reasons that Boston sports fans should support Liverpool, there are many. Obvious is the common ownership they share in Fenway Sports Group. In the long-term, one hand washes the other. Second, Liverpool's history ?- its past glories, recent struggles and quest for renewal — must be attractive to Boston fans that, before 2001, only knew winning as a distant memory. Finally, Bostonians take their sports very seriously. Liverpool's fan base is as passionate a group as you will find in the sporting world, hands down. Be safe down there in Philly, Elliot. You can always come home.

Why do football clubs allow drums to be taken to football matches? They are most annoying when the drums are used whoever is attacking. Somebody soon will smash the drum over their heads, especially if it happened at Anfield. Let's get the FA involved and ban this stupid, annoying drum bashing.
– Tom Elliott, Liverpool, U.K.

Hello Tom, it seems what we have here is a classic case of different strokes for different folks. Some clubs allow drums into matches because they add to the atmosphere and help keep the crowd engaged. Also, you never never know when something like this will happen. I don't see drums having a place at Anfield anytime in the near future. Your atmosphere rocks as it is. As for getting them banned by the FA, you tell me. Do drums have place in English soccer culture? If not, organize a campaign to ban them. I'm not signing on. I think they're awesome. I also miss the sweet buzzing of 20,000 vuvuzelas.

Does Boston in general think #LFC investment is the reason the Red Sox might not (they didn't) make the playoffs?
– Mike Wilson, Halewood, U.K.

Even in the most neurotic and conspiratorial circles of Boston sports fandom, I have yet to see this cited as a reason for the Olde Towne Team's collapse. The Red Sox have the financial resources to compete with any team in baseball. Their failure is down to a number of factors. They are being discussed over at NESN.com. Feel free to pose the question, but be gentle. It's a sensitive time.

For me Martin Kelly has all the attributes a centre half needs and I see him making the switch in the long term. Do you agree?
– Ryan Doherty, London, U.K.

Ryan, you may be on to something here. So far, Kelly has shown good defensive instincts and a no-nonsense approach to dealing with danger in his end. What he needs is a run of games — for a half season or more -? that will help him build the confidence and experience that are necessary ingredients in any great center defender. I wouldn't be shocked to see him line up in the middle late this season or at the start of next. Thanks for all your questions and comments, Ryan. They've been brilliant (to borrow your term)!

This question was about Saturday's game against Wolves. The replay will air on Friday, Sept. 30, at 8 p.m. on NESN and NESN National.

That?s all for now. Thanks for the questions and keep them coming. RIP Bill Shankly. 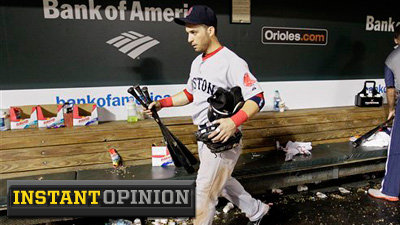