These are the times that try men's souls.

OK, so maybe the original intent of that statement in 1776 had an eensy-weensy bit of more importance than making NFL picks, but the sentiment applies nonetheless.

I was gunning for 16-0 last week, and I was in decent shape, until in the matter of a half-hour, three wins turned into losses, and the week ended with a 7-9 record and my head hung in shame.

But enough about the bad news. This week, I've never been more confident in my picks. Some of these lines are downright criminal (Giants minus-1?!) and it's just what the doctor ordered to get back on the winning track.

Unfortunately, though, the Ridiculous Quotes From Last Week's Picks (RQFLWP) will live on for another week. Don't worry — they'll be gone next week.

I know the Saints are 0-1 on the road, but that game was also against the defending Super Bowl champs on opening night, and it was also Drew Brees' best game thus far. Easiest pick of the week right here.

RWFLWP: "Fun fact: The Panthers are second in the league in pass yards and the Jaguars are 30th. Fun fact No. 2: There are only 30 teams in the league."

Note: That was just a typo, but it was a ridiculous one. I may be a dumb man, but not that dumb. I can count to 32 … most of the time.

Detroit (+1) over DALLAS
The Detroit Lions pulled off a remarkable comeback and show they have some real guts on the road, and they're rewarded by being underdogs. You might remember in Week 1 I decided that I'm taking the Lions as underdogs pretty much every chance I get this year. You can tell this team thrives on that. When they're playing a Dallas team that looked to be in complete disarray and you add in that it's a short week for the Cowboys, this pick seems like a layup, too.

Notes: Yes, I even make ridiculous statements about baseball, too!

This line speaks to how artificial Washington's 2-1 record is. If you're not a favorite over an 0-3 team, and if you can't beat a Dallas team that tries over and over again to lose to you, you're probably not as good as your 2-1 record indicates.

Granted, the Rams are as bad as their 0-3 record indicates, but they've got a home victory in them. (Note: That statement is based on nothing.)

Tennessee (+1.5) over CLEVELAND
I've gone against Tennessee every week thus far. I'm sorry, Nashville, it was unintentional, I swear.

I'm going with the Titans this week because they have a plus-14 point differential while the Browns' is at minus-1. Plus, all the wacky, irrelevant facts at Covers.com favor the Browns. I love going with a team that's 2-11 in its last 13 games in Week 4!

RQFLWP: "I don't like the Dolphins' defense trying to stop Peyton Hillis."

Note: I wasn't wrong about this, but strep throat sure stopped Hillis. That's my fault for not seeing this illness coming.

Buffalo (-3) over CINCINNATI
What's been a bigger surprise this year: Buffalo going 3-0 or Cincinnati hanging tough in all three of its games and even winning one? Remember how we all felt about the Carson Palmer-less Bengals a month ago? An 0-16 record seemed probable. Instead, they've won by 10, lost by two and lost by five.

Minnesota (-1.5) over KANSAS CITY
It took a 15-point spread for the Chiefs to finally cover a spread this year. Am I going to pick them to cover a 1.5-point spread a week later? No. No I am not.

Carolina (+7) over CHICAGO
By whatever stroke of misfortune, the Bears have been on TV in the Boston area all three weeks. What is that about? They are the new Giants, who I think were televised in Boston 20 times last year, somehow, and drove me to the point where I was complaining about the color of their pants.

The plus side of watching Chicago closely for three weeks is that I've learned rather extensively that they will not cover a seven-point spread. Plus, I kind of like Cam Newton playing in any weather that is not a monsoon.

RQFLWP: "Until we see [the Colts] as two-touchdown underdogs, they'll win my No-Brainer of the Week Award."

Note: So the Steelers couldn't cover a spread. Sue me.

New York Giants (-1) over ARIZONA
Really? The Giants beat the dream team and they get treated like this? Against a team that lost to the Seahawks? Am I missing something here?

Sometimes people put way too much stock in the traveling/time zones thing. Sometimes you just need to pick the better team with the better quarterback.

Atlanta (-4.5) over SEATTLE
Heck of a win by the Seahawks over the Cardinals last week. That's great. Good for you guys. Bad news: This week, you have to face a team from a real division — and a team that's underperformed thus far to boot.

New England (-4) over OAKLAND
I like to set guidelines for myself before seeing the lines. For example, when I thought about this game, I said I like the Patriots in any spread under 4.5. So if I follow my own logic, I take the Pats here. But as I'm staring at it as a reality, I'm becoming hesitant.

That's not for any reason … other than the fact that I watched the Patriots give away a 21-0 lead to the Buffalo Bills a few days ago. It's hard to shake that image. Really hard.

To help, I looked back on the '09 season, when the Patriots got dominated by the Bills in Week 1 but, through a series of fortunate events and a pair of Tom Brady-to-Ben Watson touchdowns, pulled out a win. The next week … they lost 16-9 to the Jets in one of the worst games the Pats have ever played. Yikes.

So why did I say 4.5? I don't know, but I've watched so much Patriots football over the years, I'm trusting my instincts. And I can justify it by looking at last year, when they went 2-0 after their only losses and outscored Buffalo and Pittsburgh in those games 77-56. The Pittsburgh game was their second-best showing of the year, too. OK, I feel better now, and so should you.

PHILADELPHIA (-8.5) over San Francisco
When in doubt, go against the the NFC West. That strategy will get you where you need to go nine times out of 10.

Denver (+13) over GREEN BAY
The Packers are good. Very good, even. But to this point, they're not a big win team. Eight points over the Saints (which never should have happened because the ball was inexplicably in Mark Ingram's hands instead of Drew Brees'), seven points over the Panthers (when Newton threw for 432) and 10 points over the Bears (which should have been three if not for the phantom holding call on the craziest punt return I've ever seen) shows that the Packers may not be clicking on all cylinders. Call it a Super Bowl hangover if you want to, but they're still 3-0. It's for that reason that this pick terrifies me, but I can't in good conscience pick the Packers to win by two touchdowns right now.

SAN DIEGO (-8) over Miami
I learned on Wednesday that Bob Sanders was placed on injured reserve. I don't take any pleasure in other people's misfortunes, but I couldn't help but laugh. Ever since the TV announcers began salivating over his plays, he's missed more games (39, soon to be 53) than he's played (11).

As for this game, I see it playing out similarly to the Patriots' thrashing of the Miami defense. Philip Rivers, Vincent Jackson, Antonio Gates and Malcom Floyd are going to tear apart Miami's 30th-ranked pass defense. Look out.

(In all seriousness, I'm not sick. It's too bad about Bob.)

BALTIMORE (-3.5) over New York Jets
You may think I'm overstating this, and you may be right, but you're not going to prevent me from saying it.

This could be the biggest regular-season game of Rex Ryan's head-coaching career.

His team is coming off a bad loss in Oakland, during which the Raiders outrushed the Jets by 134 yards and forced two turnovers. The Raiders out-Jetsed the Jets. The Jets don't like that.

Now, Rex is going up against his old team in a game you know he's dying to win. That's even more the case after that brutal 10-9 loss to Baltimore last year, when the Ravens held Mark Sanchez to 74 passing yards and limited the Jets to 176 total yards of offense. Nobody's more competitive than Ryan, so you know that's been burning him up for more than a year.

Now, it's a matter of his team can rally behind him and pull off an emotional win in Baltimore. With Joe Namath chiming in from afar, with critics questioning the Jets' toughness and with Darrelle Revis feeling the pressure to prove that the Jets aren't just a trash-talking team, can they respond to adversity?

I'm betting no, and that it all begins to unravel for Rex. Call me crazy if you'd like — I generally deserve it — but when the Jets are no longer the mighty Jets in a few months, I'll hate to say I told you so. 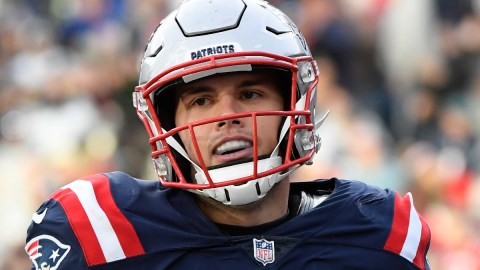