There is outrage everywhere. There is panic on the streets of Montreal. Folks in Vancouver are beside themselves. Buffalo is on the verge of completely exploding. The sanctity of the sport of ice hockey is at stake. The hockey sky is falling. We're all going to die.

If you believe everything you hear, you'd think Milan Lucic pulled a Marty McSorley on Ryan Miller. But everybody just needs to calm down.

The tremendous atrocity to humanity that took place on TD Garden ice on Saturday evening was a full-speed event. Lucic, all 228 pounds of him, was skating full bore for about 70 feet, and when he looked up, he saw a goaltender standing directly in his path. He then hit the goaltender. He then, correctly, got called for a penalty, because you can't hit the goaltender. It's in the rules.

He was mostly untouched by the Sabres on the ice. He went to the penalty box for two minutes, then left the penalty box. Life went on. But not for some people.

Miller went out of his way to tell the world that he thinks Lucic is a piece of excremement (he didn't specify human or animal, unfortunately), and Sabres coach Lindy Ruff began making bold statements about how the sport of hockey is now forever altered and will never be the same. Players will hit goalies, goalies will get hurt, our pets heads are falling off! All that was missing was Ruff's trademark bottle cap toss, which he perfected in the very same building in the spring of 2010.

That led to angry newspaper columns, improper commenting from people who should never say anything and a North American debate about whether or not what took place in Boston was the greatest crime the world has ever seen.

What it comes down to is simple. Many people are upset because A) they hate Lucic with a passion and B) they hate the Boston Bruins even more. For evidence of that, find me the outrage from Brian Gionta's hit on Maple Leafs goaltender James Reimer from late October. Go ahead — see if Dave Stubbs of the Montreal Gazette wrote 1,000 words about how awful and tragic that hit was and that Gionta's lack of suspension or discipline would forever change the way hockey would be played. Despite the fact that Gionta cleaned Reimer's clock, and that Reimer was actually in his crease and not out beyond the faceoff dot, and that the goalie has not played due to concussion-like symptoms since the hit on Oct. 22, Gionta only got called for a two-minute minor for goaltender interference. There was no firestorm of anger and hatred toward Gionta for a few reasons. One, people like Gionta. Two, it was most likely a high-speed accident, not a premeditated assault. Three — and this is the biggest — Reimer isn't an Olympic hero and didn't call Gionta a piece of [expletive] after the game.

In fact, not even Reimer's head coach, Ron Wilson, had much to say about Gionta, only noting that Reimer "just didn't feel right" and had to leave the game after the first period. Even now, with Reimer having been unable to play for nearly four weeks, Wilson told the Toronto Star that he doesn't think Gionta had any ill intention.

That's because he probably didn't. Lucic, though? Lucic was smiling and smirking and made light of the situation afterward. There's just no way Lucic had any thought in his mind other than "I'd like to concuss Ryan Miller right now." Why? Because he's Milan Lucic! He plays for the Boston Bruins! It's in their blood!

The whole thing is a bit over the top, and the fact that Brendan Shanahan (a man who's shown a willingness and even a desire to suspend everyone in the league for just about everything in his first year on the job) didn't deem Lucic's hit suspension-worthy should have quieted the debate. Instead, it's only added fuel to the fire, enough so for Shanahan himself to join in on the fun.

"I think Buffalo's comments are irresponsible to suggest that it's open season," Shanahan told reporters Monday night, regarding Ruff's notion that it's now "open season" on goaltenders. "I will have this warning for players: It's not. If you run a goalie, you're going to find yourself in the same situation that Lucic was today, you're going to have to explain yourself [in a disciplinary hearing] and [if] you don't explain it sufficiently, and if I don't buy it, you're going to be suspended."

And of course, right on cue, the Sabres were victimized again by hits on their goaltender on Monday night. Montreal's Erik Cole skated directly into Jhonas Enroth and was called for goaltender interference. You can watch the play here. Will the Montreal fans and columnist call for a Cole suspension? Is the future of the sport of hockey at stake? Is Cole's egregious error going to force us to "shove a steel rod up the back of the obedient netminder's pants and have someone from league operations sit behind the net and slide him from post to post," as Stubbs suggested in the Gazette?

You can probably figure out the answer on your own.

Maybe the Lucic hit on Miller will alter the rule book, but how? The league disciplinarian will always have to climb inside the mind of the offending player and determine his intent. In this case, Shanahan saw no intent to injure the goalie, while so many folks whose blood boils at the sight of the spoked B saw Lucic's eyes turn red and devil horns grow out of his head as he intentionally laid waste to an elite goaltender.

Look — it's terrible that Miller got a concussion on the play. The hit was bad. That's why it earned him a two-minute minor. That's what the rulebook called for. If you want to change the rules, then argue the rules should be changed, but don't argue that a player needs to be suspended to satisfy the rulebook you've created in your own mind. The world doesn't work that way.

You also have to understand that hits like these happen. They happened with Gionta and Reimer, they happened with Cole and Enroth, and they'll continue to happen. It's hockey. Stuff happens. But it's apparently only a big deal if Lucic and an Olympic star is involved.

The whole ordeal really should be used to teach a couple of lessons.

Second, the Bruins' winning the Stanley Cup last June may have vaulted Lucic into position of most-despised man in the league, at least for this year. Many people choose to only remember the younger Lucic who dropped the gloves seemingly every other night rather than the guy who scored 30 goals and finished with 62 points last season. Right now, he's tied for 15th in the league with eight goals, and he remains one of the most valuable players on Boston's first line.

No matter. He'll only be known as a goon to some people who refuse to accept reality. 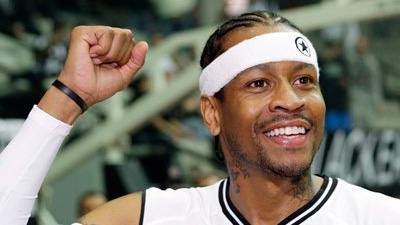 Allen Iverson Rips Into Federal Lawyer in Deposition Transcript, Tells Him to ‘Go to Hell’