Q&A With Patrick McCabe: American Players Should Marry an EU Woman If They Want to Play in Europe - NESN.com Skip to content NESN.com returns for another soccer question and answer session. We conduct weekly interviews with interesting people who have interesting things to say about the beautiful game.

We’re pleased to be have Patrick McCabe as our guest. He is the President of Santio Sport + Entertainment, a premier player representation and event marketing agency that focuses on American and European soccer.

McCabe has represented top players in North America for over a decade. A list of Santio’s current clients reads like a “who’s who in American soccer” book. They include 2010 MLS MVP David Ferreira, Brek Shea, Tim Ream, Teal Bunbury, Tally Hall, Zach Lloyd, Westford, Mass. native Mike Fucito and Boston’s own Sheanon Williams. McCabe (and Santio Sport) is one of the few people with the ability to consistently help American players land at European clubs.

NESN.com: How and why did you get into the player representation business?

McCabe: It was purely by accident. When MLS began in 1996, I was playing in South Africa and a few teammates expressed interest in getting trials. They asked if I could assist them and when I came home I called my local team, the Revolution. I called and called. Joe Cummings (New England’s general manager at the time) finally called me back and he invited Jerome McCarthy, older brother of Benni McCarthy, to preseason camp.

NESN.com: What is the best way for a player schooled in the U.S. soccer system to get to Liverpool, or another big club?

McCabe: Marry a woman from the European Union! The reality is that it is extremely difficult for Americans to have any chance of playing for Liverpool or other Champions League teams. You either need a European passport or be playing for the U.S. men’s national team on a regular basis. The regulations for a work permit  are designed to keep the playing level very high. Many countries have limits for non-EU players and this does not help our American players. Each country may pose different challenges.

NESN.com:What is unique about being an agent that deals primarily with American players and American teams?

McCabe: The game here is growing every year. I think the fact that we work in an environment that is constantly changing and evolving is unique. The excitement is very real as the game becomes more embedded in our society. The quality of the players, the MLS itself and the various mechanisms and regulations that teams deal with make it like no other place in the soccer world. If you have not seen these things take shape over time, as an outsider, you see the system as backward or outdated. The overall improvement of our players is very exciting.

NESN.com: Tell us about the perception European clubs have about American players. How has it changed over the years?

McCabe: The mere fact that European clubs have full-time scouts based in the U.S. is an indication that the respect factor has increased. We have all different types of players in the U.S. and a blend of influences in how players develop. I think teams are more impressed now with the technical aspects of our players, whereas years ago it was more based on the strong “American mentality” of never giving up or our work rate. Tactically, our players are seen as behind their European peers. Overall, we are moving in the right direction.

NESN.com: What does Major League Soccer need to do to improve its product?

There are many areas. I think It needs a full reserve schedule of 34 games. It needs to look at reducing how many older players come into the MLS. Obviously, better salaries for all players can assist in attracting better players.

NESN.com: You’ve seen and heard of a number of foreign stars who were rumored to be interested in coming to MLS. Who are some of the more ridiculous or outrageous ones you’ve heard about?

There are too many to recount here!  I used to shake my head when you heard a star’s name mentioned but now you pause and think it might be true. MLS clubs have been very aggressive  with approaching big names. You might see Nicolas Anelka and others here very soon.

Thanks again to Patrick McCabe for answering our questions. You can learn more about Santio Sport + Entertainment by clicking here or follow the agency on Twitter @Santiosport. 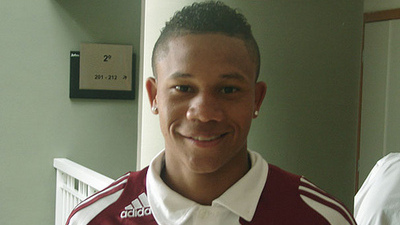 Javier ‘Chicharito’ Hernandez Nearly Gave Up His Soccer Career in 2008