WILMINGTON, Mass. — The Bruins have beaten Toronto in each of the first three meetings between the Northeast Division rivals this year.

Check that, the Bruins have done more than simply beat the Leafs. They have routed them by a combined 19-5 count in those three wins.

Boston has dominated a team that has otherwise handled just about every other opponent it has faced, with the Leafs posting a 14-6-2 record in all games not involving Boston this year. But don't tell the Bruins that they have Toronto's number.

"I don't think it's a huge edge like everyone talks about," Bruins center Chris Kelly said. "Obviously there's been a few games where the bounces have gone our way and maybe the bounces haven't gone their way. But the three games we've played, they played hard and they've been competitive games. The score maybe doesn't indicate that, but that's been the case."

A case could certainly be made for Wednesday's 6-3 win being closer than the final score. The Leafs scored first in the opening period and trailed just 3-2 after two, with the Bruins pulling away with a late goal by Milan Lucic and an empty-netter by Brad Marchand.

The same can't be said for the first two clashes, which were never in doubt as Boston rolled to a 6-2 win at home on Oct. 20 and a 7-0 victory in Toronto on Nov. 5. Still, the Bruins expect a stiff challenge when the Leafs return to the Garden on Saturday to complete a home-and-home series.

"I think they're a team with a lot of pride and they obviously don't enjoy losing to us the first three meetings of the season," Lucic said. "So they're going to come out and try to bring a little bit more. We've got to expect that and I think we've got to want to bring more as well. There were a lot of lulls [on Wednesday]. Even though we did win 6-3, I felt like there were some lulls in our game that we need to touch up on because if we keep making the same mistakes we did last game it will end up in the back of our net more than it did last game."

Aside from a few shaky moments on Wednesday, the Bruins have brought some of their best efforts against Toronto this year. Rather than revel in the lopsided scores of the series so far, the Bruins actually credit the Leafs for bringing the best out of them.

"A lot of it is respect for their team and knowing how good you have to play to beat them," Bruins coach Claude Julien said. "I didn't think we played that well last game. I thought they played a pretty good game. The score was indicative of the way they played and they way we played, but nonetheless there's confidence on our side and the fact that we have that confidence and that experience certainly has helped us."

That confidence will go up against the Leafs' determination to avoid a fourth straight loss to Boston on Saturday. And the stakes go beyond simple pride, as the top spot in the division will once again be on the line with the Bruins holding just a one-point lead on the Leafs.

"I know they're going to come in hard," Kelly said. "It's a good chance for them to rebound and it's a good opportunity for us to move up in the standings. And they want to move past us in the standings. Just like the game was on Wednesday, you're playing for first. It's a big divisional game."

Former Bruin Phil Kessel has come up big in most games this season. He's leading the league in scoring with 16-16-32 totals in 25 games, but has no goals, one assist and is a minus-5 in the three games against his old club. Since being traded to Toronto, Kessel is just 2-5-7 and a minus-12 in 15 games against Boston, but the Bruins insist they are not doing anything out of the ordinary to shut him down.

"To be honest, we haven't said anything special about Phil Kessel," Julien said. "I think it's one of those things where if he's on the ice we are aware of what he's done, but we handle every team the same way whether it's [Sidney] Crosby or others. We know Phil is leading the league, we certainly know him well, but it's more of a five-man unit than it is one guy watching one guy. So far we've been pretty successful at it, and it's a good thing because he's off to a great start and has been a very valuable player to his team."

While the Bruins haven't become obsessed with stopping Kessel, the Leafs may want to pay a little more attention to Lucic. The Bruins' power forward has 5-3-8 totals and is a plus-6 in the three games against Toronto this season.

"It's funny, because before this year I had never scored a goal against Toronto," Lucic said. "But for some reason this year it's been going in against them. It's been fun. It definitely hasn't been easy. Even though I've had success, it hasn't been easy. I've just got to keep playing hard as I have."

All the Bruins have vowed to maintain that mentality on Saturday despite the relative ease with which they've beaten the Leafs in the first three meetings of the season.

"Every game that we've played them has been a big game," Lucic said. "They've been playing well this year. They've been having a good year. I think us battling for that top spot in the Northeast Division is what's made these games good to get up for and brought a little more of that fire to the game." 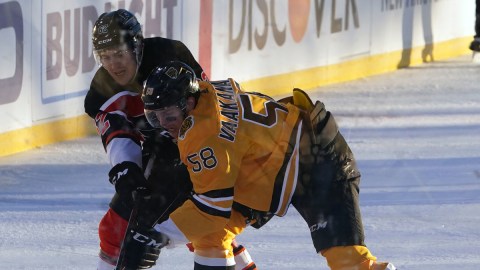