While the Bruins leading the NHL in scoring is a bit of a surprise, seeing Boston near the top of the NHL in goals against is nothing new.

The Bruins have always been a stout defensive team under Claude Julien. And while Julien’s system calls for the forwards to help out defensively and the top-flight tandem of Tim Thomas and Tuukka Rask in goal have a lot to do with the Bruins ranking fourth in the league with a team goals-against average of 2.15, the Bruins' defense has played a major role in making Boston one of the stingiest teams around.

So with the All-Star break upon us, we turn our attention to the blue-line corps for the second installment of the midseason report card. As with the forwards, grades are based on the expectations for the players coming into the season and the fulfillment of their specific roles on the team, and not meant to be used as a direct comparison between players. With that duly noted, it’s on to the evaluations.

Zdeno Chara
At this point, there’s not much more that can be said about Chara. The Bruins captain remains one of the elite defensemen in the world and leads the Bruins in just about every imaginable way. He tops the team in ice time in every situation, leading the way at even strength (18:44), shorthanded (3:13) and on the power play (3:03). Still, his overall ice time of 25:01 is down nearly a half a minute from last year and almost three minutes less than his first season in Boston (27:57 in 2006-07). If he stays at that level, it will be his lowest average ice time since coming to Boston, a wise move as Julien is doing his best to keep Chara fresh for what he hopes will be another long playoff run. The slight reduction in ice time hasn’t cut into Chara’s production, as he’s tied for ninth in the league among defensemen with seven goals and 12th in points with 27. He also has 91 hits, 52 blocked shots and his three fighting majors are the most he’s had in a season since finishing 2008-09 with four. Oh, and he’s also third in the league (and on the Bruins) in plus/minus at plus-26.

Dennis Seidenberg
Seidenberg raised some pretty high expectations after his stellar postseason performance, joining Chara on a dominant top pairing that was crucial to Boston’s Cup victory. That duo has played together sparingly this season, with Seidenberg paired primarily with Joe Corvo. Despite that change, Seidenberg has been as steady as ever, remaining a shot-blocking machine (103 in 47 games) and a physical force on the blue line (84 hits). He’s also chipped in offensively with 2-15-17 totals and is a plus-16 while second only to Chara on the team in ice time (23:59).

Johnny Boychuk
Boychuk can infuriate at times with the occasional gaffe, but he’s developed into a dependable defenseman capable of logging big minutes (third on team at 20:30). He’s proven a reliable partner for Chara on the top pairing, allowing Julien to keep Seidenberg on the second pair and anchor a second strong tandem that gives the Bruins defense enviable balance. Boychuk has a powerful shot that can be an effective weapon from the point, but Johnny’s rockets have been misfiring lately with no goals in his last 23 games. Overall, his 3-6-9 totals in 46 games are identical to the playoff stats he put up in just 25 games last spring. His plus-24 is solid and he adds some thump with 77 hits and 81 blocked shots, but the Bruins coulduse a little more offense from Boychuk.

Andrew Ference
Ference doesn’t do a lot to get noticed on the ice, at least when he’s not celebrating goals in Montreal, but his absence from the lineup is always noticeable. The Bruins defense was extremely shaky in the first two games of his current three-game suspension for a dangerous hit on Rangers defenseman Ryan McDonagh. Ference helps settles things down on the back end, stabilizing the defense and the leadership he brings to the team on and off the ice was recognized when he was given one of the A’s as an alternate captain this season. This year he’s also been a surprising offensive producer, already matching his career high in goals with four and the 20 points he has at the break are the most he’s put up in a full season since a career-best 31 in 2005-06.

Adam McQuaid
McQuaid’s second full season in the NHL got off to rocky start as illness kept him out of the opener and a head/neck injury after stumbling into the boards in Carolina cost him three more early games. McQuaid has come on stronger as the season has progressed, chipping in across the board with 2-5-7 totals, 52 hits, 69 blocked shots and a plus-16 and has been used extensively by Julien in key defensive situations. He’s even shown a bit of offensive ability of late with a willingness to jump up into the attack when opportunities present themselves. He has 1-2-3 totals in his last three games after managing just one point in his previous 27 games. He hasn’t been as much of a physical presence as in previous years, in part because of those early injuries and partially because he’s had difficulty finding dance partners with the reputation he earned last season. McQuaid has just two fights this season after racking up a dozen la st year.

Joe Corvo
If nothing else, Corvo has proven a slightly more effective and dramatically less costly alternative to Tomas Kaberle, not that either of those traits are particularly hard to come by these days. Like his predecessor, Corvo hasn’t done much to help the power play (1-5-6 totals with the man advantage) and hasn’t scored much in any situation. It took 27 games for him to score his first goal, and after a two-goal outburst Dec. 10 in Columbus, he’s gone another 19 games without a tally. He’s had no points at all in his last nine games and just 0-1-1 totals in his last 14 games. His plus-14 overall is respectable, but he has struggled more defensively of late and has been prone to some costly turnovers, perhaps a result of pressing to produce more offensively. After spending the bulk of the season on the second pair with Seidenberg, Corvo has recently been dropped to the third pairing. If the Bruins acquire defensive help in a trade, he could see his playin g time dwindle even further.

Steven Kampfer
After making a strong initial impression as a rookie last year with 4-4-8 totals in his first 20 games, Kampfer has struggled to crack the lineup on a regular basis or make much of an impression when he has played since. He had just two more points in his final 18 games last year, didn’t dress in the playoffs at all and has just 0-2-2 totals in nine games this season. Four points in his last 27 games isn’t exactly what was hoped for out of a guy expected to play more of an offensive role from the blue line. He’s suffered injuries to both knees in that span, another warning sign for a player whose best asset is his mobility. He has struggled defensively at times, and has become an option Julien doesn’t want to use too often, as he returned to the lineup for the first time in over a month when Ference was suspended and played just 3:15 and 8:16 in final two games before the break. He’ll remain the club’s seventh defensemen for now, but could be pushed out of that role if the Bruins acquire some veteran depth on defense before the deadline.

Matt Bartkowski
For the second year in a row, Bartkowski had a strong camp and opened the season with the big club. Last year, he accompanied the team to Europe before being sent down to Providence. This year, he broke camp with Boston again, though that was largely because Kampfer suffered a preseason knee injury. Still, he made it into the lineup for three of the first six games when McQuaid was sidelined. But Bartkowski looked overmatched against NHL competition, averaging just 6:07 of ice time with no points and a team-worst minus-2. He was demoted to Providence midway through October and has remained in the AHL since.

Saturday: The midseason report card hands out grades to the Bruins goalies 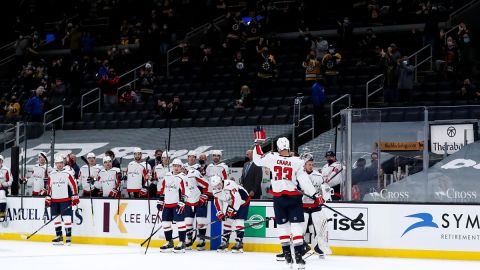