The jury is still out on Ryan Braun. When the Brewers outfielder — and 2011 National League MVP — tested positive for a banned substance in December, it sparked debate on whether a re-vote for the MVP award was necessary.

Dodgers manager Don Mattingly reignited the discussion on Tuesday, telling ESPN.com that it "makes sense" to strip the award away from a player who failed a test for performance-enhancing drugs. In a revote, the award would likely be presented to Dodgers outfielder Matt Kemp, who finished second in the voting.

Although Mattingly's comments could be motivated by a desire to reward his outfielder, he is right. It would be logical to seize the award, but only if Braun failed the test in the regular season, the sole period the Baseball Writers Association of America evaluates during the voting process.

It says right there in the guidelines the BBWAA sends to its members before voting: "Only regular-season performances are to be taken into consideration."

Braun's positive test, however, occurred during the postseason. In October, to be exact. As a result, there's no hard evidence that PEDs contributed to his 33-homer, 111-RBI performance from April to September.

There's speculation that Braun's alleged steroid use lingered longer. While the slugger has likely been judged in the court of public opinion, speculation isn't sufficient proof for the BBWAA to revote.

As it stands, the only possible advantage from the PED use was that the 28-year-old's efforts helped catapult the Brewers into the National League Championship Series against the Cardinals. Again, that obviously doesn't fall into the criteria in the MVP voting.

There is only one argument standing in Braun's way. In the BBWAA guidelines, voters are encouraged to judge an MVP candidate by "general character, disposition, loyalty and effort," among other characteristics.

A failed drug test would certainly raise questions about one's character. Despite that charge, Braun's spotty decision-making would only apply to the postseason. When the voters filled out their ballots — following the regular season — Braun's image was as pristine as ever.

That is why Jack O'Connell, longtime BBWAA secretary-treasurer and award administrator, issued a statement to dispel any notions of stripping Braun's title.

"I got the same question after Ken Caminiti came clean about his steroids usage, and whether we should give the 1996 MVP award instead to [second-place finisher] Mike Piazza," O'Connell told the Los Angeles Times. "The answer is no.

"We did not strip Alex Rodriguez of the 2003 MVP when it was learned later he used PEDs while in Texas. The voters used the information they had at the time of the election. I don't see how we can change that."

At this point, Braun still maintains his innocence. If his appeal isn't overturned, he will be suspended for the first 50 games of the 2012 regular season.

But unless he publicly admits PED usage during the 2011 regular season, Braun has earned the right to remain the 2011 National League MVP. Yanking away his award on speculation alone just isn't enough. 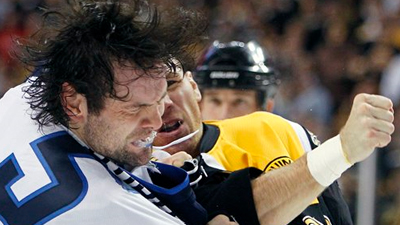