End of game, Celtics win 94-84: This night belonged to Paul Pierce, who scored 15 points to move into second place on the Celtics' career scoring list. But it shouldn't overshadow several performances by his teammates.

Rajon Rondo had 10 points and 14 assists and did not commit a single turnover. It's the first time Rondo has gone a full game without a turnover since April 7.

Kevin Garnett was also on his game again, scoring 22 points to give him at least 20 in back-to-back games. Garnett hadn't done that since Oct. 29 and Nov. 2 of last season.

As mentioned, though, this night belonged to Pierce, who not only moved his name up in the record book, but also came within one assist and two rebounds of a triple-double.

Fourth quarter, 1:56, Celtics 92-77: It's dunk time, and the veteran Celtics did a surprisingly good job keeping up with the spry Bobcats.

Bass, Wilcox, Brown and Wilcox again combined for four straight baskets that were dunks. Unfortunately for Charlotte, three of the four were by Celtics, increasing Boston's lead to 15 points.

Pierce is unlikely to get his triple-double, but that probably won't matter to him on this night.

Pierce hit a 3 to increase his scoring total to 15 points, but his eight rebounds and eight assists bear closer watching. Pierce has been an all-around threat this season, and a triple-double on a night like this would really open the eyes of the folks who will set the All-Star reserves Thursday.

Fourth quarter, 8:37, Celtics 77-64: Pierce's place in the record books is secured, and in the fourth he turned his attention to playing the role of shot-creator.

Pierce assisted all four of the Celtics' field goals in the first 3:13 of the fourth. Pierce's playmaking upped his assist total to eight, second-most on the team to Rondo's 12 assists, and gave the Celtics their largest lead thus far.

End of third quarter, Celtics 69-62: Allen added two more buckets to bring his third-quarter total to 13 points, he might have to keep it up.

The crowd started to relish the fact that it witnessed history, but this one is far from in the bag. The Celtics let a bigger lead than this one slip away against the Cavaliers.

Walker assumed the technical foul free throw duties in the third quarter and that seemed to get him into a groove. He enters the final quarter with 14 points after going to the hoop and drawing a two-shot foul on Wilcox, hitting both.

The Celtics did not attempt a free throw in the third.

Third quarter, 2:49, Celtics 65-54: If every quarter was the third quarter, Allen might set the Celtics career scoring record in less then two seasons.

A few days after scoring 12 points in a third quarter, Allen went off for nine points in this third, and there are still almost three minutes left. He scored the last nine Boston points to maintain the Celtics' 11-point cushion.

Third quarter, 5:14, Celtics 59-50: Pierce came out for an ovation during the last stoppage, creating a sweet moment for the lifelong Celtic.

After the double technicals, things got dicey when Walker nailed a 3 to bring Charlotte within four points. The Big Three responded, with each future Hall of Famer scoring to push the lead up to 11 points, the largest of the game. Garnett knocked down a jumper, Pierce cut down the lane and finished a nifty bounce pass from Rondo, and Allen hit a spot-up 3.

Brown hit a baseline jumper to bring the Bobcats back within single digits and now has a respectable eight points on 4-for-4 shooting.

Third quarter, 9:07, Celtics 52-45: Pierce and Thomas got into a bumping match after trying to box each other out, and O'Neal stepped in to enforce some discipline. The referees halted play and called a technical foul on Pierce and Thomas. Whatever.

Third quarter, 10:15, Celtics 48-40: There it is. Rondo came out of a scrum with the ball and found Pierce for a set-shot 3-pointer to make Pierce second on the Celtics' all-time scoring list. John Havlicek is the only Celtic to score more points.

O'Neal committed a foul to give the crowd a chance to applaud Pierce, and the refs whistled O'Neal for an intentional foul. Is tone-deafness a requirement to become a basketball official?

Halftime, Celtics 45-38: The clock was ticking down on the first half, so Pierce figured, why not?

Pierce put up a long 3-pointer with a hand in his face as the first half buzzer sounded. The shot, which would have put him past Larry Bird on the Celtics scoring list had it gone in, didn't even draw backboard.

Pierce had a rough first half with the scoring list clearly on his mind, but fortunately for the Celtics some of his teammates more than made up for him.

It was a clean and fast first half with just 17 total free throws. The Bobcats were 6-for-9 from the line while the Celtics were 6-for-6.

The Good: Rajon Rondo looked like himself for the first time since he returned from an eight-game layoff due to a sprained right wrist. Rondo handed out six assists and went 3-for-5 from the field (plus 2-for-2 from the line) in the first half. … Kevin Garnett kept playing the best run of basketball he's played all season. Garnett shot 5-for-8 from the field to lead the Celtics with 10 points. … Reggie Williams kept Charlotte in the game, scoring 12 points and adding three assists in 19 minutes. Williams was 4-for-7 from the floor, 2-for-5 from behind the arc and 2-for-3 at the line. … Byron Mullens played the role of the Anderson Varejao/Tyler Hansbrough type that has given the Celtics fits all season. Mullens scored seven points and had three rebounds, and caused two steals with his active hands.

The Bad: The Celtics as a team are bound to improve on their long-distance shooting in the second half after misfiring on nine of their 10 attempts in the first half. … Pierce played 19 minutes and hit only three of his 10 shots, finishing the first half with seven points to put him two shy of Bird for No. 2 on the Celtics' career scoring list. As usual, he found other ways to impact the game with five rebounds and four assists. … Tyrus Thomas took five shots and missed four of them. He impacted the game in no other worthwhile way. What a sight for the former No. 4 overall pick out of LSU.

The So-so: Kemba Walker spends most of his time shooting the Bobcats out of games with ill-advised shots, so the fact that he only scored two points on 1-for-4 shooting in the first half is at least a slight improvement. The rookie out of UConn had one assist and two turnovers, and Bobcats coach Paul Silas resorted to asking Williams to bring up the ball in the second quarter.

Second quarter, 2:22, Celtics 39-36: The crowd is agonizing over Pierce surpassing Bird. The last two 3's Pierce attempted got a rise out of the fans as the shots traveled toward the hoop. When the ball bounced away, the crowd let out a sigh.

Pierce is still short of Bird, but he has four assists, including finding Allen underneath the hoop on an inbounds play to give Boston the lead. A tough layup by Bass pushed the C's ahead by three points.

Second quarter, 6:06, game tie 35-35: Pierce hit a baseline jump shot to put him two points short of Bird for second place on the Celtics scoring list. In the meantime, Garnett continued to play a fine all-around game, although he missed another contested layup.

Garnett hit a long jumper to make him the first Celtic to 10 points and holds the team lead with three rebounds. He had trouble with an oop pass from Rondo, though, and couldn't finish over D.J. White after coming down.

Second quarter, 8:24, game tied 31-31: Mickael Pietrus gave the Celtics a five-point advantage to end the first quarter, and the Celtics nearly gave the whole thing away.

Williams kept it coming with a three-point play to pull Charlotte within two points before a Byron Mullens jumper tied it up. Avery Bradley then gambled on defense and let Derrick Brown drive to the hoop for a go-ahead layup.

Pietrus followed a Sasha Pavlovic brick with a dunk to tie the game back up, and Garnett attempted his fourth 3 in as many games, although this one was a miss.

End of first quarter, Celtics 27-22: Tuesday night may be remembered as the game when Pierce passed Bird on the scoring list, but more importantly for the short term it might also be the game when Rondo truly came back.

The point guard looked out of sorts in his previous two games back, but he was on his game in the first quarter. Rondo shot 3-for-4 from the field for six points and handed out five assists with no turnovers.

Pierce scored five first-quarter points but looked somewhat hesitant, shooting 2-for-5 and committing two turnovers while playing the entire 12 minutes. He did chip in three rebounds and three assists.

First quarter, 1:50, game tied 18-18: The Warriors have made some curious personnel decisions lately. They waived Jeremy Lin, who is only setting New York on fire with the Knicks, and did not tender Reggie Williams an offer.

Williams returned from months of inactivity due to knee surgery and dropped 21 points on Saturday, and he's scored eight of Charlotte's first 14 points tonight.

Kemba Walker got a nice hand for scoring his first basket on a driving layup to make him 1-for-3 from the floor in his first game in New England as a pro.

First quarter, 6:43, Celtics 10-8: Kevin Garnett is such a jerk. This is supposed to be Pierce's night, and Garnett scored four of the Celtics' first five baskets.

To punish him, coach Doc Rivers replaced Garnett with Brandon Bass. Or maybe it was just part of the normal 5-5-5 substitution plan. I'm going with the punishment angle.

7:25 p.m.: The Bobcats need all the help they can get, and when Corey Maggette strained his left hamstring Saturday it meant their top three scorers were all sidelined with injuries.

Gerald Henderson, probably the Bobcats' best player, has been out with a strained right hamstring, so on the bright side Henderson and Maggette have two healthy legs between them.

Veteran point guard D.J. Augustin has been out since Jan. 22 with a broken big toe on his right foot, and Diaw was anticipated to have a big year before he showed up out of shape. Bismack Biyombo, a rookie from Congo who was taken with the seventh pick in the draft by the Kings before being shipped to Charlotte in a three-team trade, has struggled to learn the NBA game. He is averaging just 3.3 points in 23 games.

As if that's not enough, Charlotte has lost 11 straight.

So… yeah. Give Pierce the ball and get out of the way, Celtics.

7:05 p.m.: Few players have ever been as proud to be a Celtic as Paul Anthony Pierce, and on Tuesday he has an opportunity to move past Larry Joe Bird on the Celtics' career scoring list.

With 10 points, Pierce would pass Bird at 21,791 career points, second in franchise history to John Havlicek.

8 a.m.: With just 10 points, Paul Pierce will move past Larry Bird into second place on the Celtics' career scoring list.

Tuesday's opponent should make that relatively easy for Pierce. The Charlotte Bobcats (3-21) have the worst record in the NBA, and aside from combo guard Gerald Henderson and UConn product Kemba Walker, there most likely isn't a player on their roster that another team would really want. And Henderson is out with a strained right hamstring.

The Celtics (13-10) eye their fifth straight win and ninth win in their last 10 games, as well as a chance to move four games above .500 for the first time this season.

Join us for updates and analysis during the game, with tip-off scheduled for 7:30 p.m. 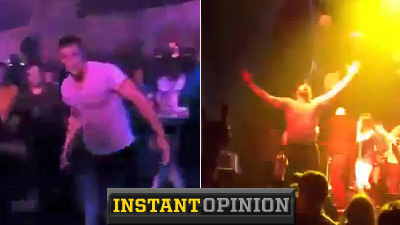