Despite the Broncos’ success behind Tebow in 2011, the public perception was that Elway was among the Denver decision-makers who didn’t want Tebow to be the team’s long-term quarterback. Yet, with Tebow’s intensely rabid fan base, the Broncos would have had to tread lightly if they thought about replacing him, because the public relations backlash would have been ferocious.

And then, along came the future Hall of Famer. There’s no argument that Manning is one of the all-time greats, and in the once-in-a-lifetime chance that someone of his caliber becomes available, it’s worth exploring. Sure, Manning’s surgically repaired neck is a concern, but he’s a risk worth taking.

The fallout from here is that Denver isn’t big enough for both Manning and Tebow. Even if it were, there’s little sense in spending that type of cash on Manning and then subjecting him to Tebowmania.

And therein lies Elway’s out. Maybe the Broncos can land a decent draft pick as trade compensation for Tebow. Or maybe they can’t. But if the widespread perception was correct that the Broncos didn’t view Tebow as the long-term answer, Elway, coach John Fox and the rest of the staff can take solace in the fact that Manning was Tebow’s ultimate trump card.

If there’s a heavy market from teams with a hunger for some good public relations — also known as ticket sales and jersey orders — Tebow could be worth a second-round draft pick, and maybe even more. But if the consensus around the league doesn’t buy into Tebow’s raw football skills, he could be acquired for a mid-round selection.

Let’s run through a list of his potential landing spots.

Patriots: Yup, it starts right here in New England. Bill Belichick is very fond of Tebow, and the pair had an extended pre-draft meeting in 2010. Plus, Patriots offensive coordinator Josh McDaniels used a first-round pick on Tebow, so two of the decision-makers in New England are fans of the Florida product.

If the Patriots target Tebow, he’d fill the broad positional role as a football player, and McDaniels would have to get creative to put Tebow in the right position to succeed. In reality, there doesn’t appear to be any room for Tebow within New England’s offense, but Belichick has never been shy about acquiring good football players and letting it all play out.

Bottom line, it just seems unlikely to happen. The Patriots could get in on it if Tebow’s price is a mid-round pick, but they’ve got very little incentive to match a team that desperately needs Tebow to sell tickets.

Dolphins: It’s been another disastrous offseason for the Dolphins, who have whiffed on Manning and quarterback Matt Flynn, and it sounds like they weren’t even in contention to trade up for Baylor quarterback Robert Griffin III.

But get this: Last season, the Dolphins honored Florida’s 2009 championship team during the game in which they hosted Tebow’s Broncos. It was a pathetic promotion aimed at ticket sales by Dolphins owner Stephen Ross, but Gator fans filled the stadium and went crazy for Tebow throughout the game. If Ross can stoop that low — to tick off his own team by honoring the opponent — you better believe he’ll want someone like Tebow in tow.

Browns: They’re still reeling from missing out on the trade for the No. 2 pick in the draft, which would have yielded Griffin. The Browns, in turn, kind of gave their support to quarterback Colt McCoy. The decision the Browns must make: Is a lower draft pick for Tebow better than reaching for Texas A&M quarterback Ryan Tannehill with the fourth overall pick?

Jaguars: There was a major outcry from Jacksonville fans to draft Tebow. He’d pump a ton of energy back into that fan base, which would be a welcomed sight for a new owner.

Cardinals: It’s a long shot because they’ve already invested so much in quarterback Kevin Kolb. But who knows what happened behind the scenes during the Cardinals’ courtship of Manning — maybe Kolb is ticked. Weirder things have happened.

Eagles: Another long shot, but Tebow could do worse than learn from someone like Michael Vick, and the Eagles definitely need backup due to Vick’s injury concerns. Tebow’s personality might not fit well with the Eagles’ locker room, and that would either be the best thing to ever happen for them or the worst.

Cowboys: All together now: “Because you never count out Jerry Jones.” 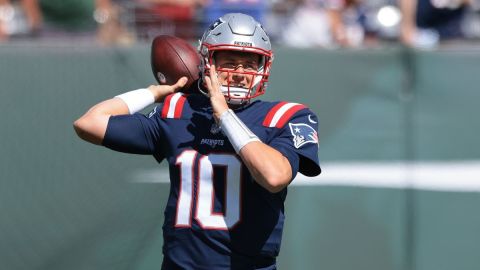