Tom Brady, Patriots May Have Been Victims of Saints' Bounty Program and 19 Other Thoughts - NESN.com Skip to content The week started with the Patriots' decision to place the franchise tag on wide receiver Wes Welker, but right now, this is about as quiet as it will get in New England for a few months.

Free agency begins Tuesday, and as that eventually quiets down, the draft preparation will continue to heat up. Then, midway through April, the Patriots will be back at Gillette Stadium for voluntary workouts. It goes by fast, folks.

1. The Saints' bounty scandal dates back to 2009, which means they played the Patriots twice during a three-year span when the Saints were charged with paying players to hit with the intent to injure. Those games happened in the 2009 regular season and 2010 preseason, which came after the Patriots hosted the Saints at training camp.

2. I went through my live blogs for each of those games. In 2009, right guard Stephen Neal succumbed to an ankle injury against the Saints. However, I couldn't track down any video of the play, and none of my coverage indicated whether or not the injury was the result of a fishy hit. Then again, if something looks out of sorts, I'd like to think I would have written about it, so I'm guessing the injury happened during a clean play.

3. I also went through the injury reports before the Patriots' Week 12 game against the Saints and the Week 13 game against the Dolphins just to see if the Patriots suffered any new ailments as a result of the game in New Orleans. Obviously, as is the case with any game, there were some new injuries.

4. Just keep in mind that injury reports aren't always beacons of truth, and that particular week's injury could have grown worse over the course of multiple weeks and simply flared up following the Saints game. I'm also not insinuating that any of the following players were injured due to dirty hits. I just think, as the NFL continues to peel back the layers of this scandal, it's worth pointing out who could have been injured as the Patriots played the Saints.

5. At any rate, here were the Patriots' new injuries after they played the Saints relative to the official injury report: quarterback Tom Brady (finger), safety Bret Lockett (groin), linebacker Tully Banta-Cain (shoulder) and Neal (ankle). Brady's finger injury was questionable because it was added to Friday's injury report, but there was speculation that it occurred against the Saints.

6. Oddly enough, Brady also injured his finger in the 2010 preseason opener against the Saints. After looking through my live blog of that game, I noticed quarterback Brian Hoyer took a ton of big hits, but I'd attribute that to poor play from the offensive line.

7. Now, were the big hits the result of extra motivation, or was it just good, hard football? Would there even be a bounty system in place for the preseason? It's unclear if anyone will ever get answers to those questions.

8. Since injury reports don't exist in the preseason — and because it was the preseason opener — I couldn't do a similar comparison as I did in the fifth note. So, in the very unscientific way of trying to figure out who got hurt in that preseason game against the Saints, I went through the official game book to see which Patriots played against the Saints but missed the next padded practice three days later.

10. Maybe, at the end of it all, these names won't mean anything, but it's something to keep in mind as the Saints' scandal continues to unfold in the coming days, weeks and maybe even more.

11. One final note on this thing: It appears that the bounty system was a defensive thing, and I obviously listed some injuries to some of the Patriots' defensive players. However, there could have been some mixing and matching with special teams units. And if not, it's still a team-wide mentality. You can't have a large-scale bounty system in place for three years and think the offensive players were clueless. That's just not realistic.

12. I still really believe the Patriots and wide receiver Wes Welker will reach a longer contract because it's in the best interest of both sides. Welker wants too greatly to remain in New England, so he'll be eager to get it done. By knowing how loyal and team-oriented Welker is, I also wouldn't be surprised to see him take less than market value to get it done. That's within reason, of course.

13. And the Patriots should try to massage that salary cap number by maneuvering some of the $9.4 million in guaranteed money. If they can spread it out over the life of a three- or four-year deal, they'll obviously give themselves the chance to be more aggressive in free agency. And if the Patriots really backload the cap number, they could create the avenue to restructure the deal again later when it's time to look into contracts for younger stars as they come off their rookie deals.

15. Clearly, things will get tricky after the 2013 season when the Patriots have to find a way to retain Gronkowski, Hernandez and Spikes while also looking to 2014 when McCourty, Brady and defensive lineman Vince Wilfork head into the final year of their deals. Also, the Patriots' 2011 draft picks will expire after the 2014 season, though they have a team option on tackle Nate Solder for 2015. That will be a brutal stretch for the front office.

16. Thing is, will the Patriots be able to reach early extensions with Gronkowski, Hernandez and Spikes the same way they did last season with linebacker Jerod Mayo? It's obviously early to think about that at this exact juncture, but the Patriots' front office will likely begin exploring those options once things settle down with free agency and the draft.

17. It's only a matter of time before the fans' movement begins to lock up Gronkowski, but he'll be able to set the market if he can somehow avoid the franchise tag. Since the Patriots can hold that over him, the two sides might have a chance to come to terms. Until that happens, though, Hernandez and Spikes won't have as much of an incentive to sign early, especially if they're looking for big contracts on the open market. Of course, if they're perfectly happy in New England and the front office is willing to ante up, that could be all it takes.

18. Since quarterback Peyton Manning's tenure in Indianapolis will reportedly conclude Wednesday, it will mark the end of the Patriots-Colts rivalry, which was just so tremendous for a full decade. The rivalry took a hit when Bill Polian was fired in January, and now that the Patriots' two greatest nemeses from Indy are out, so is the rivalry. But if Manning lands with the Dolphins or even the Jets, well, look out for a nice new version of the Brady-Manning rivalry.

19. Defensive end/outside linebacker Mario Williams is heading for free agency, and there's been some national speculation that he could draw some interest from the Patriots. Sure, it makes plenty of sense, particularly since they reportedly showed some interest in signing defensive end Julius Peppers two years ago. Thing is, I've thought for weeks now that Williams could command upwards of $100 million, and the Patriots won't hit that. The one thing I keep hearing from people is why would Williams want to take $100 million to play for a lousy team when he could take less and potentially win a Super Bowl with the Patriots?

20. And I continuously respond, because Williams is 27 years old, and I don't know any 27-year-olds who would turn down a $100 million contract. Yeah, $60 million is a lot of cake, but turning down an extra $40 million is damn near foolish, especially when he could be back on the market when he's about 33 or 34 and can link up with a Super Bowl contender at that point. 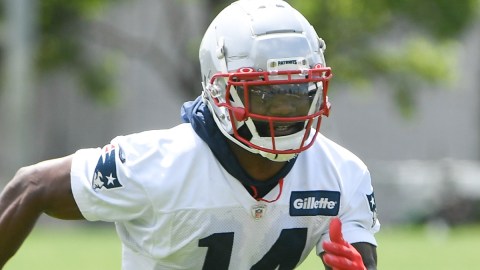 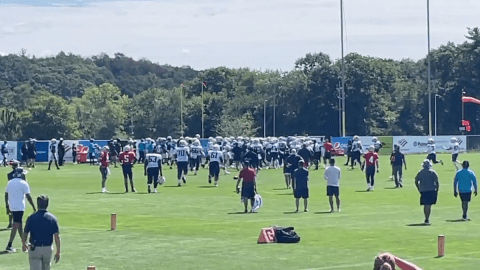