Editor's note: NESN.com is going to tell the story of the 2012 Red Sox in Bobby Valentine?s words. Each game day, we will select the best Valentine that sums up the day for the Red Sox.

Felix Doubront has arguably been the Red Sox' most consistent starter this season. Heck, you might even go as far as to say that he's been the best pitcher on a staff that boasts some of the highest-paid players in baseball.

Doubront, who wasn't even locked into a role in the rotation a month ago, has been overpowering opponents with his precise command of the strike zone and inducing plenty of ground-ball outs. The 24-year-old pitcher has produced four straight quality starts for the Red Sox, and while he picked up just his first win of the season on Thursday night, Boston is 3-1 when Doubront toes the rubber.

His fastball may not fringe on triple digits and his curveball may not have quite the same free-falling drop that Josh Beckett's possesses, but Doubront is a true pitcher and someone who uses a combination of skill and knowledge of the opponent to secure outs.

On Thursday, Doubront did just that. His line of three earned, three walks and five hits over six innings is the sign of a solid start and helped the Red Sox cruise to a big 10-3 win in Chicago.

Manager Bobby Valentine was pleased with the way Doubront pitched and explained his team's performance in a rather simple manner after the game.

"That's baseball at its finest," Valentine said when referring to the offensive production and Doubront's success on the mound.

Jon Lester and Beckett may be seen as the so-called "aces" of Boston's staff, and most often they do live up to their lofty billing. This season, though, the Red Sox' most consistent starter has undoubtedly been Doubront.

His numbers don't exactly tell the story of his successes thus far in 2012, as a 4.09 ERA and 10 walks in four outings isn't exactly Cy Young worthy. But Doubront's consistent effort and focus on the mound allows the Red Sox to keep games close, whether the offense is clicking or not.

As the season continues to move forward, Doubront will become even more valuable to Boston's pitching staff. If Lester and Beckett are able to sort out their hiccups, and if Clay Buchholz can finally settle his control issues, then Doubront's role in the No. 4 slot will be vital to the Red Sox' overall success.

Keeping the bullpen well rested, and more importantly pulling out some much-needed victories, will help to alleviate a lot of the pressure felt early in the season and propel the Red Sox into a far better position as they turn their attention to the postseason down the road.

Bill Belichick, Patriots Get Aggressive to Make Serious Upgrades to Defense in First Round of Draft 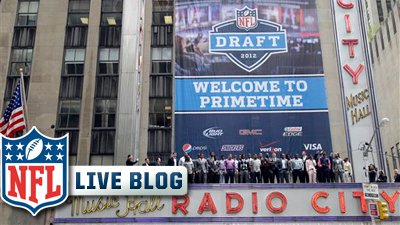