The New England Patriots will be one of the numerous organizations being represented during the 116th running of the Boston Marathon on Monday.

The Patriots Marathon Team will be competing in the historic race, once again participating for charity. The team has been training and fundraising for the big event, raising over $144,000 this year, breaking their previous record of $85,000.

Teamed up with the Boston Athletic Association as a Legacy Charity, the Patriots Marathon Team will donate the money to the newly named Myra Kraft Community MVP Award, named after the deceased wife of Patriots owner, Robert Kraft.

The Myra Kraft award gives grants to nonprofit organizations through nominations. The award is a continuing part of the Patriots "Celebrate Volunteerism" campaign.

The New England Patriots Charitable Organization has raised over $300,000 since fielding a marathon team five years ago.

Leading the Patriots team are staff members Jeff Connors and Courtney Elsen. The two Pats employees will be leading a team consisting of 28 runners.

"The Kraft family and the Patriots organization would like to thank Jeff, Courtney and the entire marathon team," said Patriots Charitable Foundation President Joshua Kraft. "Jeff's fundraising total of nearly $20,000 is an all-time high by a member of the Patriots Marathon Team. Thanks to the entire team’s dedication, deserving volunteers throughout the region will benefit from the entire team's record-breaking fundraising efforts."

The team can be spotted wearing official Patriots Marathon Team jerseys donated by Under Armor and All Sports Heroes in Lowell. 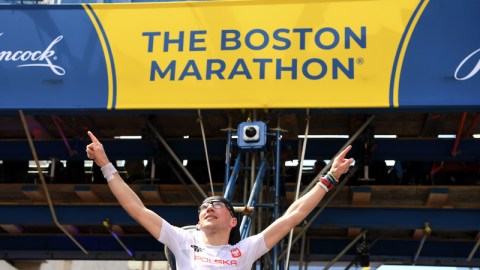