Kerry Wood retired from Major League Baseball on Friday, putting an end to a career that was up and down but solid all-around.

Wood made one final appearance at Wrigley Field before officially calling it a career. He faced one batter on Friday and put an exclamation point on his resume by throwing three straight strikes to record his final K.

Wood spent parts of 14 seasons split between the Cubs, Indians and Yankees, but Chicago is the place that became home for the big Texan. He spent 12 years with the Cubs, first as a starter and most recently as a reliever.

The 34-year-old experienced his fair share of injuries throughout his career, but he proved to be a reliable arm when healthy. Wood burst onto the scene as the NL Rookie of the Year in 1998, and was selected to two All-Star Games while compiling a 86-75 record and a 3.67 ERA.

Wood may not have lived up to the hype of being a No. 4 overall draft pick, but he frequently demonstrated an ability to get hitters out. His 20-strikeout performance in 1998 is the most obvious indication of such.

Friday’s send-off at Wrigley was an emotional time for Wood, and the right-hander admitted after the game that he couldn’t muster up words to his teammates for five minutes.

“I was fortunate enough to play this game for a long time and play in a wonderful city in front of the best fans in baseball,” Wood said. “It was just time.”

Thanks for the memories, Kerry. 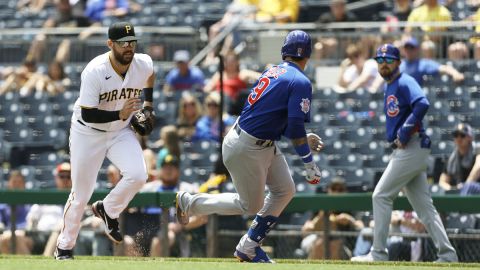