The ninth innings of Friday’s Red Sox-Rays game was full of madness and plenty of drama. After a pair of beanballs were exchanged from each side, the benches cleared and an all-out melee ensued.

Well, Rays’ manager Joe Maddon apparently was furious with Boston’s behavior in the incident. Maddon was fuming in the clubhouse after the game and guaranteed revenge, saying, “We will respond, I can promise you that.”

But apparently Tampa’s head man even took to Twitter after leaving the ballpark to express his displeasures.

In an emotional tweet after the game, Maddon attacked fellow manager Bobby Valentine and the Red Sox by saying “what happened in the ninth inning reeked of intent.” The well-respected manager went on further to call it “ridiculous, absurd, idiotic, incompetent, cowardly behavior.”

Very proud of our effort 2nite. What occurred in the 9th reeked of intent. Was ridiculous, absurd, idiotic, incompetent, cowardly behavior. 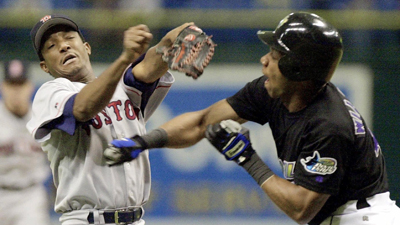 Which Coors Light Game Rule Should Fans Play by This Weekend?