David Booth wasn’t with the Canucks when they lost to the Bruins in last year’s Stanley Cup Final.

He wasn’t even in the lineup the only time the teams faced each other again this season — he was sidelined with a sprained right knee when the Canucks returned to the Garden in January.

But the Vancouver forward has obviously spent enough time with his Vancouver teammates to build up some animosity for the 2011 champs.

He took those frustrations out on a different kind of bruin during a recent hunting trip in Alberta. Booth bagged a large black bear and tweeted a picture of his trophy with the comment, “Just killed a Chara sized bruin!? He noted the bear was seven feet tall and had a 21-inch skull.

Booth, who was traded from Florida to Vancouver in October, is an avid hunter whose previous hunting exploits were recounted by Miami Herald Panthers beat writer George Richards in his In Frozen Pond blog in 2010. Richards reported that Booth “snagged a 14-point red stag with his bow and arrow from 40-plus yards out” in New Zealand that summer, hunted antelope in Montana and planned to use his permit to hunt alligators in the Everglades.

But this latest hunt sounds a little more personal. Even with both the Bruins and Canucks exiting the playoffs early this spring, the rivalry remains as heated as ever, with Bruins captain Zdeno Chara in the middle of it.

And if Booth does play in the next meeting between the clubs, the Bruins might want to make sure the metal detectors in the arena are working. Hunting tools are about the only things these teams haven’t tried to use on each other on the ice in the past year. 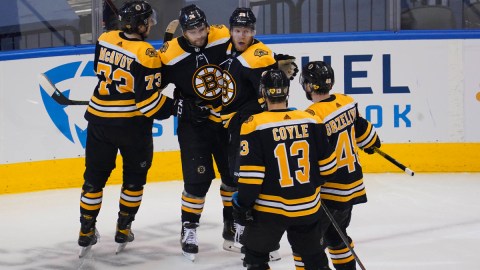