"Do you have baseball questions?" Gonzalez asked. "Waiver questions? I'm not talking about that."

With no questions other than ones about the Dodgers claiming him on waivers,
Gonzalez walked away from reporters and disappeared into the back of the
clubhouse.

But Bobby Valentine wasn't afraid to touch the subject, saying that the waiver claim was simply standard procedure. He also said Friday's game against the Royals would be business as usual between him and Gonzalez.

"I'll see Adrian and I'll tell him how much I love him and want him and think that he should be here," Valentine said. "And he'll look at me and say 'Oh, I wonder if that's true or I wonder if there's a trade brewing?' Until the whole thing is over and he is our player forever, then it's all kind of B.S."

The skipper said Red Sox general manager Ben Cherington didn't offer any details on any possible deals during a brief meeting Friday afternoon. Valentine, a former player, said Gonzalez should be honored by the Dodgers' interest.

"If someone claimed me, I'd be happy as hell because that would be flattering that someone wanted me," Valentine said. "In Adrian's case, I think it's still flattering. I would think, if a team wants him, how can you not want him? He's a great player. And that's the other thing. How could someone not want to claim him?" 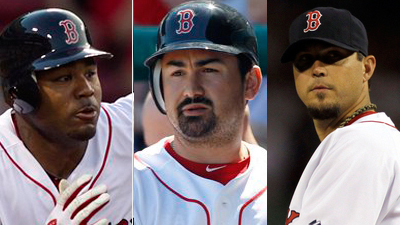