Stop me if you’ve heard this one before: Someone sneaks something into a soccer game and throws it onto the field. It explodes and someone gets hurt.

Anton Shunin is the latest victim of the trend which is no laughing matter. The Dynamo Moscow goalkeeper was taken to the hospital after a “fan” threw a firecracker onto the field and it exploded near where he was standing, according to R-Sport.

“Something fell, I looked down and then the firecracker exploded in my face,” Shunin said on Dynamo Moscow’s Twitter feed. “I?ve got problems with my vision and hearing. I’m going to hospital for an examination.”

“Anton has received a burn to the cornea, one eye sees poorly,” he said.

The attack took place 36 minutes into Dynamo’s home game against Zenit St. Petersburg. A firecracker was thrown from the section holding the Zenit fans. The force of its explosion knocked Shunin to the ground, injuring his eyes and ears.

Soon thereafter, the referee spoke with both managers and suspended play with Dynamo leading 1-0. The Russian Football Association has not decided whether to award Dynamo the victory, but it is an option.

This was the second case of a player being injured by an explosive in the last week. On Wednesday, a game in Argentina was suspended when fans threw firecrackers onto the field and it exploded near a goalkeeper and medical staff.

Shunin, a 25-year-old Russian international was hospitalized in this latest incident. Will it take a greater tragedy for this to come to end? Let’s hope not.

Watch the incident in the video below. 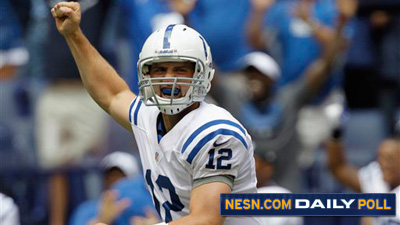 Vote: How Many Yards Will Andrew Luck Throw for Sunday Against the Patriots?

Grizzlies Show Carmelo Anthony, Knicks That Going Small Can Be Fun and Successful, But Costly Defensively