There’s a common misconception in New England that Devin McCourty is not only one of the weakest members of the Patriots’ defense, but that he’s a bad player in general. That could not be further from the truth. In fact, McCourty is the most underrated player on the entire team.

McCourty had a fantastic rookie season, and hopes were high as he entered his sophomore season that he would become the shutdown cornerback that the Patriots hadn’t seen since Asante Samuel or Ty Law. Unfortunately, a mix of man coverages and weak safety play led to McCourty giving up some big plays in key moments. McCourty was still his usual fantastic self in zone coverages, he was still stout against the run and he really blossomed when he was moved recently to safety. Unfortunately, none of those are parts of the game that a typical NFL fan may see.

It’s only when McCourty was matched up deep, trailing his receiver, that fans’ eyes perked up and noticed him. That’s also exactly when fans would turn on him, even if it was rarely his fault. The Patriots had some of the worst safety play in the league last season. They played 10 different players at the two positions, including two wide receivers (Matt Slater and Julian Edelman) and countless primarily special teams players. It got so bad at one point that Sterling Moore was brought up from the practice squad and thrust into a position (safety) that he had never played before.

Without help or trust over the top, any zone cornerback playing man will be bound to give up big plays. Big plays and pass defense in general is dependent on more than one player. The entire group has to work together to prevent those plays. McCourty’s biggest strengths as a player are when his man is in front of him. He can fully use his 4.3 speed and quick-twitch instincts when he can see the play developing. He’s very strong at reading opposing offenses and can very rarely be caught out of position when he’s playing zone or at safety. Where McCourty struggles more is in man. He struggles to turn and run with his receiver and fails to look back at the ball — although that may be a product of Bill Belichick‘s defensive teachings.

This season, we’ve seen one up-and-down game (Baltimore) and eight more great ones from the third-year player. In a season where we’ve seen Kyle Arrington, Steve Gregory, Patrick Chung and Moore benched at one point or another, Alfonzo Dennard and Marquice Cole buried on the depth chart to start the season, and Tavon Wilson only thrust into a starting role when injuries forced it, McCourty has been the one rock in the Patriots’ secondary. If McCourty was really nearly as bad as the public assumes he is, wouldn’t he too have been benched as some point this season?

Rookie defensive end Chandler Jones is the front-runner for Patriots defensive MVP, but McCourty is just a hair behind him. McCourty is allowing just 44.2 percent of passes he’s targeted on for catches, he has a 53.5 quarterback rating against, and he’s allowed just 291 yards in nine games with two touchdowns and three interceptions.

He’s also doing a great job lately helping out over the top. If you haven’t noticed him gracing your television screens, that’s usually a good thing. Quarterbacks just aren’t targeting him deep.

It would be easy to assume that when you see a guy get beat deep, or see him commit a penalty, it’s automatically his fault. There have certainly been those times in McCourty’s career, but no more than your usual starting cornerback. And since McCourty has taken over at safety, he’s been the best free safety the Patriots have seen since Brandon Meriweather was still playing the position correctly for New England, rather than freestyling.

It’s obvious that Belichick has all the confidence in the world in the Rutgers product, and you should too. He’s the best defensive back the Patriots have — at least until Aqib Talib gets acquainted in the defense — and any defensive resurgence will be built off his strong play. 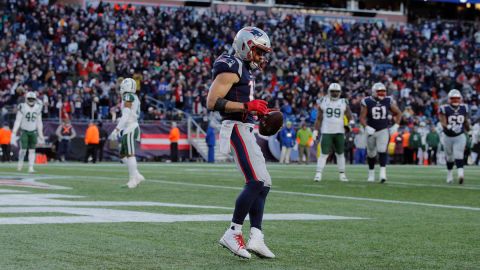