Jeremy Roenick released his autobiography earlier this year, and recently he embarked on a tour to support it. But despite the former All-Star’s removal from the rink, that doesn’t necessarily mean he isn’t still fighting.

We don’t have a whole lot of context for this, but according to Roenick’s Twitter account (@Jeremy_Roenick), he was planning to fight a social media troll on Tuesday. No word on what actually happened, but from parsing Roenick’s account, he was tentatively scheduled to fight — like, with fists — a follower on Tuesday, and was actively seeking legal advice in the Toronto area to make sure everything stayed nice and legal.

Is there a good lawyer in the Toronto area that can oversee my dispute on tues?

Again, we don’t have the whole story, but it appears that a Twitter user who goes by the handle @LaBlancaElGrand — whose tweets are protected, but features a profile picture of a bloodied Roenick — has been harassing Roenick. Rather than just ignoring the guy, however, Roenick has apparently agreed to fight him.

Obviously we can only see one side of this argument, but check out some of Roenick’s tweets below.

@lablancaelgrand gimme ur address tough guy. I told u where ill b. I swear ill give u every opportunity to be tough. W a face though

@lablancaelgrand well let’s go big boy don’t be a loser in front of thousands of people. I’m reaching out to u and ur baby balling out

@lablancaelgrand I just followed u. Lets see how brave u r nowand I will expose ur phony act 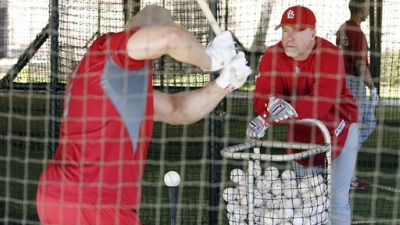 Mark McGwire Has ‘No Idea’ Why Modern Players Would Use PEDs