One former Jets quarterback has turned his attention to a current Jets kind-of quarterback.

Joe Namath criticized how the Jets have built their team in 2012 on SNY’s “The Jets Blog Podcast” on Wednesday. He also questioned why the Jets aren’t using their new toy, Tim Tebow, more often.

The criticism is valid. What the Jets are doing certainly isn’t working, and while Tebow’s mechanics and playing style are unusual, you can’t argue with his record as a starting quarterback in the NFL. Mark Sanchez has been the most inaccurate quarterback in the NFL this season, completing 52.9 percent of his passes. Presumably, the fear about turning to Tebow is his historical issues completing passes at a decent rate.

Of course, completion percentage as a whole can be a flawed statistic. Luckily, Pro Football Focus has a handy tool called “accuracy percentage” which “accounts for dropped passes, throw always, spiked balls, batted passes, and passes where the quarterback was hit while they threw the ball — factors that hurt the quarterback’s completion percentage but don’t help show how accurate they are.”

Sanchez is still last in accuracy percentage at 64.5 percent. Joe Flacco is next worst at 67.7, while Peyton Manning leads the league at 81.1 — Tom Brady is eighth at 76.6.

Namath didn’t stop at simply critiquing how New York’s second-favorite football team are using the most famous punt protector in the NFL.

“We seem to have regressed with talent. The last two years at least. The last three years,” said Namath. “And I don’t know who’s picking the players we bring in. … I’m disappointed in the talent we have, and I think you gotta start looking at who’s doing the picking and why.”

Once again, Namath makes a good point. The Jets went 9-7 in Rex Ryan‘s first season as head coach and made the playoffs. They improved in 2010 with an 11-5 record before regressing last year at 8-8. This season has been a near-disaster with a 3-5 record halfway through the season.

The issue may not simply be a matter of not bringing in the right players though. Ryan runs a very loose ship in New York, and the team also seems to welcome distractions when other teams try to stay as far away from them as possible.

One thing is for sure, the Jets will need to fix something — and fast — if they hope to make the playoffs and keep their fans happy in the future. Ryan’s quick quips won’t be so funny when the team finishes the season in the basement of the AFC East.

Mario Chalmers doesn’t seem to find whatever LeBron James and Dwyane Wade are laughing about quite as amusing. “Thank you.”
—Tom Brady‘s response to Tom Curran from Comcast Sports Net’s comment, “Sometimes you dress kind of weird” at the Patriots’ press conference on Wednesday

I’m not proud of it but I have to admit that I just watched an eposide of Full House. I feel old. #BoredInTheHotelRoom

This catch was absolutely incredible — and he didn’t even get the touchdown. 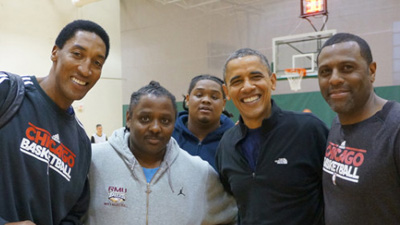