The Celtics made a number of offseason moves, so it’s understandable that they’re still trying to find the right chemistry on the court. But if you’re a C’s fan who is losing patience, allow KG to explain the situation.

Kevin Garnett, who recorded 20 points and 13 rebounds during the Celtics’ overtime win Wednesday, was asked after the game whether it’s possible to speed up the chemistry-building process. Being his usual candid self, KG responded honestly.

“You can?t speed chemistry up,” Garnett said. “I think the more practice, the more you get familiar with each other.”

“There’s no hit the fast forward button here,” Garnett said. “You’ve got Comcast. Some shows you can’t fast forward through. You’re just got to let it go through and watch the silly [expletive] commercials and be pissed, right? This is what this is.”

Again, fair enough. That seems like a spot-on television comparison by Garnett, although his choice of which cable operator to reference might not go over well in some circles. KG quickly realized this, and decided to have a little fun with reporters.

“‘Did I just take a shot at Comcast? [Expletive] it, I did it. So what? I’m a DirecTV guy anyway. This is what this is,” Garnett said, while giving a Fresh Prince of Bel Air style lean.

Moral of the story: You can’t speed anything up — except maybe postgame interviews to avoid digging yourself into a deep, deep hole.

Check out Garnett’s funny interview in the video below.

Much was made of Stevan Ridley‘s onesies. Don’t let this get-up go unnoticed. It’s not even a freakin’ million bucks, it’s only about 600,000 after Obama takes it all. This just sucks.
–Former MLB second baseman Jeff Kent after getting booted off Survivor

One source says – way too early to think\say a deal is close to being done, however, others hint if today goes well agreement won’t be far.

Yeah, you’re not allowed to do that. 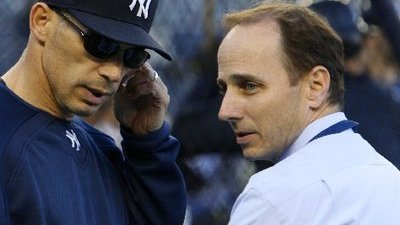